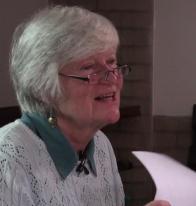 Daphne Chappell explains the triple calendar system used in the bible that was discovered by Knut Stenring fifty years ago. It has been completely ignored by revisionists who have not understood the nature of the model chronology. Daphne will assess what reliance can be placed on specific dates and time periods and what the dates reveal about the redactors who built the system into the Bible.

Velikovsky claimed that the Amalekites were an Arab people and no close relatives of the Israelites; that they were displaced from Arabia by the same

catastrophes recorded in the Bible as the Ten Plagues; and that they were the same as the Aamu who ruled in Egypt during the Second Intermediate Period, their leaders being the Hyksos pharaohs. To support these arguments, he cited the writings of several Arab “historians” from mediaeval times. In this presentation, I report on my own research into the same writings, plus those of other Arab scholars Velikovsky chose not to quote, and review how well his arguments survive close scrutiny.

Appendix to be added in a future publication.

2:15 Bob Johnson: ‘The Nature of the Sun Reconsidered’

The Electric Universe model of the Sun and the heliospheric electrical circuit is reconsidered in the light of evidence from spacecraft missions and ground-based observations since the time of Juergens and Alfvén. Bob questions the evidence for Juergens’ Anode Sun model and suggest some modifications to the model to bring it into line with the new data. The talk is based on Bob’s presentation to the EU conference in 2013, plus the subsequent discussion with members of the Thunderbolts team.

The script with slides is available here.