The NASA website and various blogs such as http://wattsupwiththat.com December 7th have video clips of a massive flare on the surface of the Sun (see below). This follows the malfunction of one of NOAAs weather satellites a day or so ago – also as a result of solar activity. 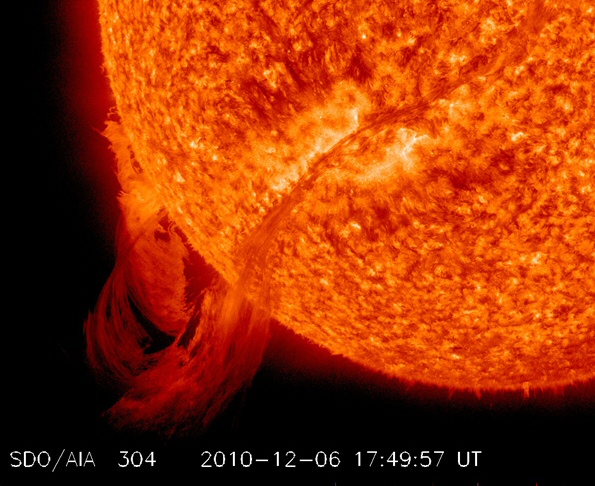 All this feeds nicely into a post at http://tallbloke.wordpress.com/2010/07/21/nailing-the-solar-activity-global-temperature-divergence-lie/ … which begin by saying AGW advocates are fond of saying the Sun can't be responsible for late 20th century warming. Tall Bloke says, what a load of rubbish. Solar cycle amplitudes are only a part of the story. Even during the last cooling phase, in the 1960s for example, the Sun was kicking out a lot of energy – a lot of sun spot activity. He produces a chart/graph to display what he is thinking and adds, we are just over the top of the warming curve. Solar data fits the temperature record much better than C02 data – and over a longer period of time.

The comments on this site are knowledgeable in the main and well worth browsing – and so too are the sites on the blog roll (on the LH side).

Over at http://news.sciencemag.org/sciencenow/2010/12/did-climate-change-drive-prehist.html December 7th … Science Now website. Did climate change drive prehistoric culture change? Climate change, here, is actually a clue to something else left unsaid – namely. catastrophism. Of course, that word is taboo and so for the time being changes in climate are the portal and what actually might have happened to cause such change is not on the radar. In this article the theme is the prehistory of North Amereica and the cultural boundaries between PaleoIndian, Archaic, and Woodland. The latter, for example, began after 1000BC and is marked by the beginning of agriculture and fully fledged village communities. On world chronology this coincides with the period following the end of the LB age in the Middle East and Levant – but is some 150 to 200 years later as it is based on C14 methodology rather than synchronisms with other regions. The PaleoIndian period coincides with a cold phase of climate – possibly the Younger Dryas and pre-Boreal. The Archaic period was contemporary with the growth of deciduous forests but is divided into three phases. Early Archaic coincides with the Boreal phase leading up to 6200BC. After this a brief cold period set in and Middle Archaic represents the period after 6200 plus the initial Mid Holocene era. Late Archaic dates from around 5000BC and all the way down to 1000BC. It lasted a long time and it is unclear if there were subdivisions within it – otherwise the 3rd millennium BC, pronounced in other parts of the world, is lacking. Now, there has been various arguments over C14 dates, especially as far as the Younger Dryas is concerned – so the answer may lie in an adjustment downwards by an unknown number of years. Even in spite of such an adjustment there are broad correlations with cultural change in the Old World.