SIS member Robert Farrar sent a link to www.dailymail.co.uk/sciencetech/article-2543973/Ceres-gushing-water-liqu… … which is about a giant asteroid described as a dwarf planet, namely Ceres, gushing water vapour from two points on its surface – see http://youtube.com/watch?v=01f99ReNJVw

In other words, exhibiting characteristics more commonly associated with comets. If it is true of dwarf planets – what about planets themselves? and Venus?

The same story is at www.space.com/24366-dwarf-planet-ceres-water-ice-volcanoes.html?cmpid=55… … the EPA Herschel Space Observatory has detected water vapour erupting from two regions of Ceres, a dwarf planet that is also the largest asteroid in the solar system. The water may be erupting from icy volcanoes, it is theorised. 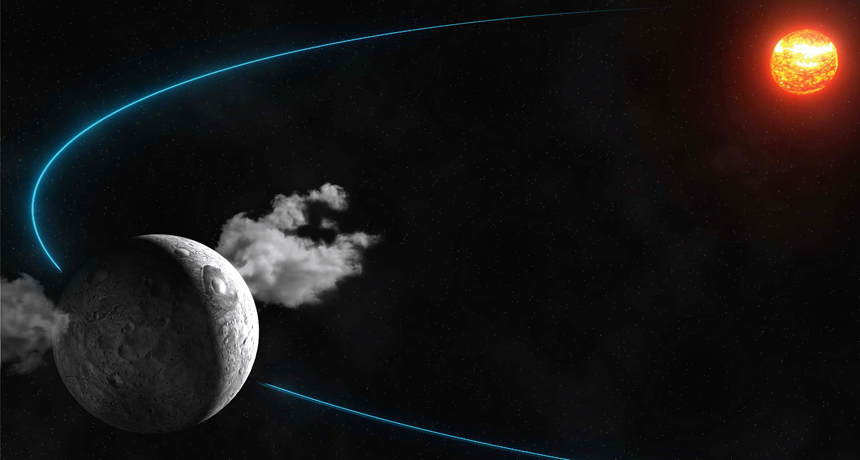 Scientists found a hint of water on Ceres as long ago as 1991 but it has never been confirmed by later observation. Cometary style sublimation is the most likely source. NASAs Dawn spacecraft is set to go into orbit around Ceres in early 2015 – after its recent visit to asteroid Vesta. The paper then adds some interesting information, very often ignored by climate scientists. Water vapour can transport a lot of heat – which can be dissipated as heat into space.

Another question – did comets and asteroids deliver water to the oceans of the Earth? Or does it have another origin – or a variety of origins?

At www.esa.int/Our_Activities/Space_Science/Herschel/Herschel_discovers_wat… … dated 22nd January 2014, the paper appearing in Nature on the 23rd. Unlike most asteroids Ceres is almost spherical and is categorised as a dwarf planet (others include Pluto). There follows some speculation, the mainstream view of asteroids. For example, when the solar system formed it was too hot on Mercury, Venus, Earth and Mars for water to have condensed. It is therefore theorised that water water was delivered to these planets somewhat later, by asteroids and comets. This appears to be guesswork on the basis no other mechanism could be dreamed up at the time – so the origin of water in our oceans is really open to conjecture.