Renewables are under development all the time. The cost of building wind farms, and installing concrete bases and access roads, and a general disturbance of the environment which is what most protestors have against them, has caused an American company to think of alternate methods of collecting energy from wind. Four prototypes exist according to the article in The Times (a couple of weeks ago). Giant inflatable wind turbines that float in the sky, held on long tethers like massive dog leads, is the latest idea.

Meanwhile, a 265 acre farm in Hampshire, near the town of Ringwood, is still using teams of heavy horses to plough, harrow, and various other tasks around the farm.

The Times environmental editor claims skylarks, yellowhammers and song thrushes are on the increase on British farms – all down to management of fields (setting aside margins etc.) This is good news, although I see yellowhammers every time I take the dog for a walk, leaping out of the hedges, and skylarks can be seen if you know where to look – and always have been. Mind you, the last song thrush I saw was on a fence post at the allotment. A sparrowhawk swooped down and that was the end of it. 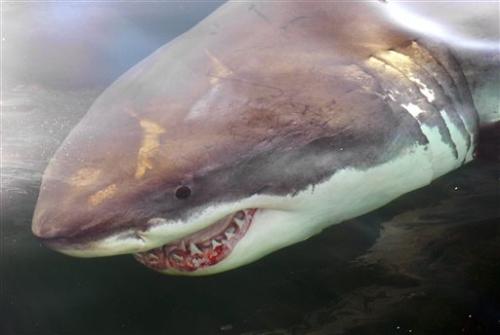 at http://phys.org/print322488229.html … we learn that in the Atlantic  and the NE Pacific the numbers of Great White sharks are on the increase – numbers are said to be surging after decades of decline. Is this further evidence of changing El Nino/La Nina conditions, the former was dominant until a few years ago and now the latter has taken a dominant role in ocean current dispersal.