Dr Daniel Brown of Nottingham Trent University is intending to bring archaeo-astronomy out from the shadows of the controversies engendered by Alexander Thom and an establishment unprepared for the fact that Neolithic people were not quite as rustic or backward as the orthodox consensus allowed in the late 20th century. A new generation of archaeologists are not quite the stuffed shirts of old and hence, archaeo-astronomy, at last, is getting a dust down and coming out of the closet, where it was swept away all those years ago, in the flower of our youth. A National Astronomy Meeting  in this, the last week of June, in Portsmouth, will highlight the fact that Neolithic and Bronze Age people in Britain and Ireland were acute observers of the heavens. They embedded astronomical themes within local landscape – see www.sciencedaily.com/releases/2014/06/140623092326.htm. 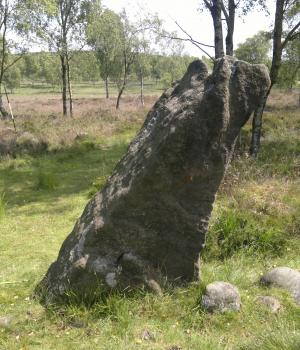 His own work, on a 4000 year old astronomically aligned standing stone at Gardom's Edge in the Peak District (above) will  be featured at the meeting.

Dr Fabio Silvia of UCL has suggested renaming the brand, Skyscape Archaeology, and is the co-editor of 'Journal for Skyscape Archaeology' (a new journal on the block). He says there is a lot to gain if astronomy and archaeology can come together towards a fuller and more balanced understanding of European megaliths and the societies that built them. It is no longer enough to collect orientation data for a large number of monuments spread over vast regions and look  for broad patterns.

Silvia's own studies focus on 6000 year old megalithic structures in central Portugal and he has found one group of them, all passage graves, are aligned with the seasonal rising over nearby mountains of the star Aldebaran. This is the brightest star in the constellation of Taurus – the actual Bull's Eye.