At https://malagabay.wordpress.com/2015/06/01/the-lovejoy-meltdown/ …. Tim Cullen has sparked interest in this offering as his article (see the link) has been reproduced elsewhere on the blogosphere – such as at https://tallbloke.wordpress.com/2015/06/01/the-lovejoy-meltdown/ … I can just about remember the furore surrounding Lovejoy as it approached the Sun and the consternation as it failed to live up to what was expected. Tim Cullen has gathered together a host of links and quotes surrounding what happened that day and how settled science, in the end, explained the odd behaviour away, unable to break the consensus mind set. 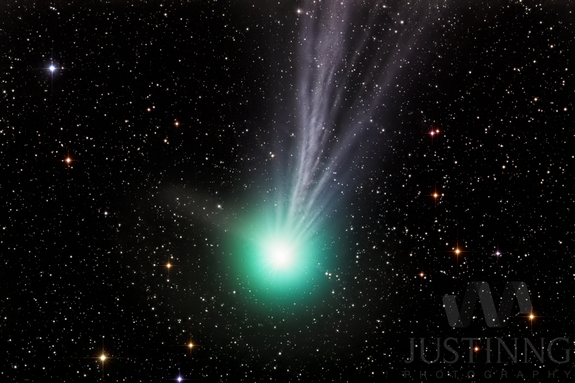 All eyes at the moment are on Comet Churyumov-Gerasimenko – but was the Rosetta mission brought forward because of unanswered questions as to what happened to Lovejoy in December of 2011.

Cullen begins by describing graphically how excited mainstream astronomers were at the prospect of Lovejoy experiencing a fiery death. If you look at www.spaceweather.com December 14th 2011 you will see how much anticipation there was – and the surprise two days later as Lovejoy emerged from the far side of the Sun (simply key in the day of the back post you want to view). Lovejoy, unlike most sungrazers, was quite large, around 200m across. However, in spite of the size it was not expected to survive its encounter with the Sun as all the ice would evaporate and the gases disperse – or that is what astronomers thought would likely happen. Lovejoy survived – so where did this leave the dirty snowball concept of comet composition?

Lovejoy came as close as 140,000km from the Sun – why did it not implode as the corona is extremely hot.

The article is well worth browsing as Cullen quotes various scientists into the lead up to the encounter and catalogues their bewilderment in the aftermath. Lovejoy did however lose its tail in the encounter – and he includes a series of images of the comet nuclei rounding the Sun while the tail continues in a straight trajectory – without attempting to follow the nuclei. Another problem is that the gravity of the Sun failed to capture the comet's tail.

Tidal theory also failed – tidal force fails to disintegrate Lovejoy as it breached the Sun's 'Roche Limit' (which is then described from source). In fact, the tail went on to wiggle wildly as it travelled through the Sun's hot atmosphere. It was possibly being buffeted by plasma waves in or near the corona. At www.nasa.gov/mission_pages/sunearth/news/comet-lovejoy.html … the comet is clearly visible racing away from the Sun minus its tail, and then, Lovejoy beams and brightens and is more visible as it moved away.

Cullen is amusing in his treatment of the scientists saying that in their eagerness to save the dirty snowball theory they untruthfully increased the size of the comet, saying it was probably 500m across (which is the border line, they calculated, for a comet to do this) and they were able to say this without flinching, blinking, yet in the lead up they were convinced it was just 200m across. In 2012 the whopper got bigger and more whoppy as in a study German scientists said the comet must have been even larger – and this was how it has been left. The dirty snowball theory is still intact – even right now after the Philae lander set down on Churyumov-Gerasimenko with a bump (rather, several bumps). It seems, as Cullen infers, the theory is more important than the observation.

Cullen then suggests that mainstream has a long way to go in their understanding of comet behaviour. We may imagine academic theorists are loathe to let go of their dirty snowball rather than your everyday astronomer and observer – who catalogue what they actually see, not what they think they can see. However, the dirty snowball theory is bound up with other consensus science 'truths' and to reject it may cause some pain and trauma in the academic world. This is why the current Rosetta Mission is so important.