At http://archaeologynewsnetwork.blogspot.co.uk/2015/06/did-early-europeans… … which comes from a paper by Polish researchers looking at Gravettian activity (in the Upper Palaeolithic). They appear to have roasted mammoth meat, burnt their bones as fuel, and used the big bones to build houses (or shelters). The mammoth was an important part of their way of life – and no doubt they followed the herds (much like Lapps used to follow herds of reindeer). Most of the mammoths disappeared at the end of the Ice Age – but some some appear to have survived on Wrangel Island in the Arctic Ocean for several thousand years- but in a dwarf form. There was a major die-off of mammoths around 40,000 years ago, around the appearance of modern humans (and the disappearance of the Neanderthals). A lot of research has centred around the idea that the arrival of modern humans led to a sharp drop in their numbers – where a catastrophic event of some kind has been noticed by others. The survivors increased in numbers but were finally made extinct around the time of the Younger Dryas event (the cause of which is in dispute). The new research concentrates solely on the Gravettian culture which flourished across central Europe as far as Iberia in the west. Some scientists see climate change as responsible for the demise of the mammoths (which are really just a large species of elephant). Others have preferred to see human agency as responsible, an idea that fits in with the Green Blob train of thinking which sees human presence anywhere in a negative manner. Basically, that is why the Gravettians are being blamed – when you get down to the nuts and bolts. Nasty humans must be responsible as elephant numbers have drastically declined as the population of the world has increased over the last 100 years. Elephant numbers have declined since the invention of the gun – when the animals could be killed at a long distance away. Angry elephants are a formidable foe. In this story the Gravettians, pictured armed with wooden clubs and wooden spears (stone tipped no doubt) are shown bringing down one of these huge beasts. That must be something of a miracle by itself – or are they supposed to have dug holes for them to fall into and then kill and butcher them? To make such an animal extinct requires a lot of effort. Gravettians, like all Palaeolithic  people and hunter gatherers in general, were not great in numbers. Population numbers rose with the invention of farming – growing your own food, and herding your own animals. It is possible the Gravettians managed the herds of mammoth in the same way as Lapps managed reindeer – so it would have been counter productive to make them extinct. The fact the Gravettian people relied so much on mammoths, to the exclusion of almost every other animal (they say) is in fact the biggest argument in favour of the idea that human agency was not responsible – and other factors were (such as the series of catastrophic events that mark the period between 40,000 and 10,000 years ago). 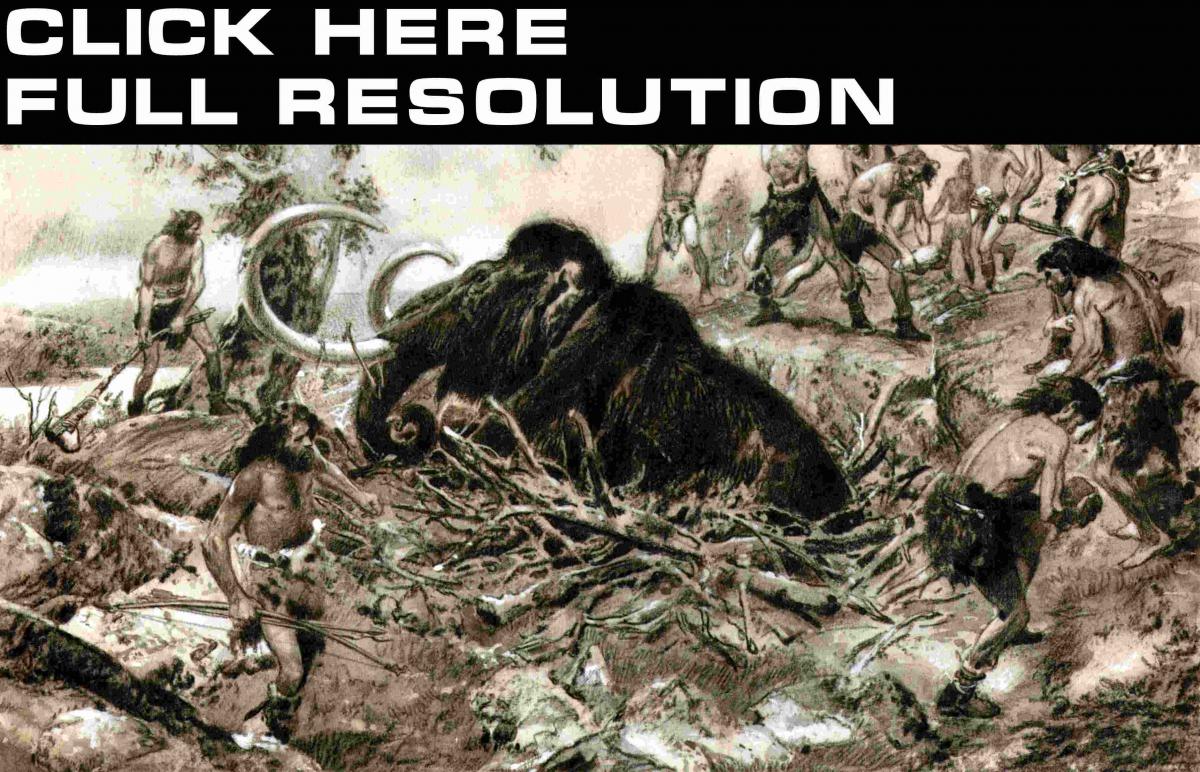 Another point worth noting is that it was not just mammoths that were affected but other large animals, herbivores and carnivores, that also became extinct (and were not in the diet of the Gravettians). Also, these tribal people would have had to gorge on an awful lot of mammoth meat, scoffing themselves silly, in order to wipe them out. It may be that Gravettians made use of mammoth bones they found – killed in a die-off earlier than they lived (say at 40,000 years ago) and available as a resource as the bones were found in heaps – like the large numbers found along the shores of the Arctic Ocean in the modern world, and still exploited as a source of ivory. Humans are resourceful creatures and would have found a use for heaps of bones and tusks – which is what seems to have occurred. The evidence of roasted mammoth meat is neither here nor there. It is not possible to eat them all – not if you are a group of hunter gatherers.

PS … something else worth considering. According to Wikipedia the Gravettains lived between 32,000 and 22,000 years ago – long before these animals became extinct.