I was watching a BBC television programme the other day on the Messel shale formation. It was fronted by the agreeable Richard Fortey – who was the face in the camera. He owns a large back yard in the Chilterns which includes a section of Grimm's Ditch which is currently being excavated (a great deal of run off and bank material has slipped into the ditch over the course of 3000 years  and is being cleared in order to find evidence of the date it was dug out). Richard Fortey is the author of several books on geology (I have a couple of them on my bookshelf) but it struck me how convenient the co2 global warming theory is for uniformitarian geologists – it allows them a get out of jail card.

As genial as Fortey was he came across as a prop – probably an expensive prop with a fat pay cheque, but a prop never the less. He flitted from one stage set scenario to another, all the time with people provided to support the narrative or demonstrate how to extract and clean a fossil etc., sometimes in Germany and sometimes in the UK. He was the stooge, the man on camera – all the work and research had been done behind the scenes (or so it seemed). At http://en.wikipedia.org/wiki/Messel_pit … we learn that Messel Pit is a disused quarry 22 miles SE of Frankfurt. Bituminous shale was mined there and it has an abundance of fossils. Its fate was to be a landfill site but local pressure groups managed to stop that happening – one of the reasons was because of its geological importance. It is now visited by tourists and was declaired a UNESCO World Heritage site in 1995. All this came out during the programme.

Brown coal and oil shale were extracted from the quarry (which ceased working in around 1971) and allowed geologists and amateur fossil hunters to explore the site. The pit is currently around 200 feet below the surrounding land topography but when extraction was taking place it went down, in the centre of the quarry, as far as 620 feet (see image above). It dates back 47 million years ago (as reported by Wiki and Richard Fortey) but is sometimes dated 49 million years ago, dating to the Eocene period. The Messel was 10 degrees further south than it is today according to Plate Tectonics theory and belongs to the Paleocene-Eocene Thermal Maximum. Richard Fortey, quoting the mainstream view, said the planet was in the process of experiencing runaway global warming (as a result of increased co2 levels). However, he also said the fossil array at Messel was akin to an equatorial rainforest. Hence, there is another explanation, left unsaid, one which also accounts for the temperate climate in what is now the Arctiuc regions, and that is that the equator was in a different position to what it is now.

Oil shale is thought to form by the slow anoxic deposition of mud and dead vegetation. In this instance, on the bed of a lake situated in the crater of a former volcano (as in image above). The sediments are 43 feet in depth and lie on top of an older sandstone foundation. As Fortey demonstrated, many of the fossils of insect life, mammals and reptiles (including the first primate and a very early form of the horse, the size of a dog), were preserved in almost pristine condition. It was just a matter of extracting them from the surrounding shale (mud stone). Some of them died in the act of copulation (mating). Overturn of the lake layers (caused by seasonal variations) (wait a minute, this is supposed to be a tropical environment) lowered oxygen content near the surface causing periodic die-off of aquatic species. Uniformitarianism demands a gradual accumulation of fossils – so have periodic die offs rather than a single catastrophic event (a mass die off). The latter would preserve the fossils in a state of good preservation simply because it happened quickly and they were buried in sediment just as quickly. However, both the Wiki and Richard Fortey say the area around Messel is thought to have been highly active tectonically during the Eocene. Scientists, therefore hypothesize that volcanic gases played a role in the die offs, and refer to an event which killed a lot and people (and animals) a few years back near Lake Nyos in equatorial Africa (the Cameroons). Reactive gases entering the lake and adjoining eco-system, it is theorised, would be quite able to account for the killing of susceptible organisms – even birds and bats (which are among the fossils). Succombing to the leaking gases they could have then fallen out of the sky and into the lake where they gradually percolated downwards into oxygen poor (and bacterial poor) water (or sediment) where they were preserved 'remarkably well' (their words). They were overlaid by successive layers of sediments which in time was petrified (mud stone).

At this moment we have to envisage a succession of out-gassing events, noxious enough to kill flying bats and birds (including powerful raptors) as well as reptiles and amphibians, lizards and frogs, and flying insects as well as aquatic insect life, and a fantastic array of water life (from a lake or marshy environment) – and on top of that, a slow process of petrification. It could well be the petrifying process which is the clue – was it immediate or gradual?

a) fossils of early mammals, such as the first primate (known) that the BBC dialogue was intent to get across, and turtles in the process of mating, some 10,000 fossilised fish of numerous species, thousands of aquatic and terrestrial insects, some with distinct colouration preserved, the pygmy horse (see image below), rodents and ground dwellers such as hedgehogs, marsupials and pangolins, crocodiles, frogs, salamanders, and the remains of over 30 plant species (such as palm leaves, fruits, pollen, wood, walnuts and grapevines), and various others. Wiki has a list of species. In some cases fur, feathers and 'skin shadows' of some species were preserved and even the death grip of a carpenter ant on a leaf as a result of a terminally parasitical fungus, has been adduced by deduction and microscope. It is almost as if the programme researchers went to Wikipedia for their information (or the Wiki entry was written by Richard Fortey) as it is almost word for word, and point by point as the story unfolded. Richard Fortey, it seemed, came along and fell in with the line of research, scene by scene (meeting people as if by prior arrangement), moving from one TV set to the next. 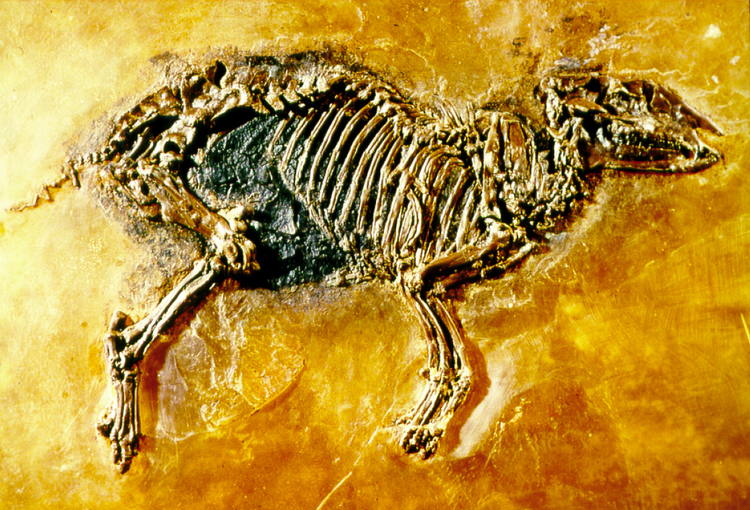 (the early horse with toes instead of hooves).

b) This might account for some of the BBC climate alarmism, if their researchers have a habit of going to Wikipedia for their information. Wiki is notoriously and continually being revised by a small group of hyper active climate doom-mongers (known as climate catastrophists). It doesn't say a lot for the quality of the research, although there is no evidence of activists interfering in geology wiki entries. It is not their forte as they say – and Fortey did not digress from the orthodox position.

c) a quick typing of Messel in your search engine will come up with lots of other sites, including Unesco and the encyclopedia of the Earth. At www.age-of-the-sage.org/evolution/messel_pit.html … we are informed that the sedimentary layer was 200m thick (which contradicts Wiki) but presumably this is an assumption based on the floor of the quarry being 200m below the land surface. It also claims it represents over one million years of accumulated deposition (but you can take that with a pinch of salt).