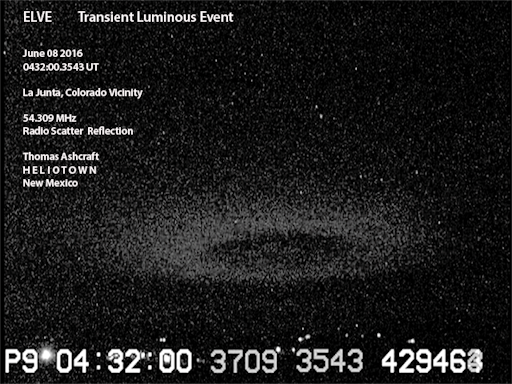 .. a Doughnut of light was seen over Colorado on June 8th, an enormous ring of light near the edge of space. Amateur astronomer Thomas Ashcraft photgraphed the doughnutusing a low light video camera.It lasted just a moment in time and was about 300km in width. This is what is known as an ELVE (Emissions of Light and Very Low Frequency Perturbations). These are due to Electromagnetic pulse sources – or that is the explanation. They have been seen on cameras on the Space Shuttle. Elves seem to appear when when a pulse of electromagnetic radiation from lightning propagates up toward space and hits the base of Earth's ionosphere.

Elves also appear alongside red sprites and the video camera that captured the doughnut also spotted red sprites leaping straight through the hole in the middle. You will need to play the video – see www.spaceweather.com June 13th (http://vimeo.com/169885841 )