BBC News also had a report of the discovery of an extensive field system on the South Downs, including beneath woodland. The LIDAR images are ground penetrating radar that are taken from overhead in light aircraft. They are often used by the Water Board for example, or the environmental agencies. In this instance the new South Downs National Park arranged for them to be made. There is also an extensive LIDAR set running along the length of the HS2 route (the high speed rail link between London and Manchester) but this is not yet at the public's disposal. See www.bbc.co.uk/news/uk-england-sussex-36771564 and www.southdowns.gov.uk/discover/heritage/secret-of-the-high-woods/ 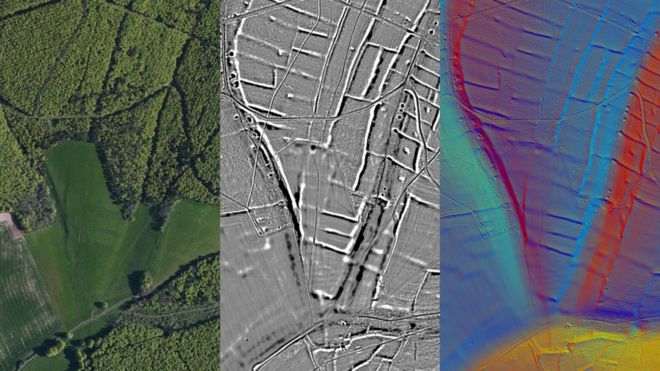 The field system is said to be pre-Roman and illustrates how big the population of lowland Britain was in the Bronze and Iron Ages. A vast area was being farmed extensively in what is now mainly pasture (sheep and cattle) and woodland. The same situation applies to almost any county in the lowlands – such as Buckinghamshire, Hertfordshire, Berkshire and Northamptonshire (and many other counties). A lot of these areas, only decades ago, were considered virtually as virgin forest until the Romans arrived – and now archaeologists eyes have been uncovered. Wherever they look, from the Fens to the Yorkshire Wolds, farming was extensive. In many areas cultivation was the norm until the Black Death when some landowners reverted to sheep pasture (driving peasants from the land and pulling down their houses in the process). The problem at that time was a shortage of labour as the plague had killed off so many people – while sheep and wool were worth a fortune.