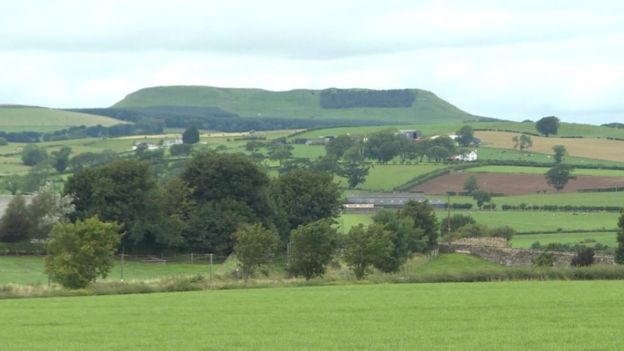 … A cache of 180 Roman lead sling bullets has been unearthed at Burnswark near Lockerbie in Dumfries. Burnswark is a flat topped hill (see image above) with evidence of an Iron Age hill fort that came under assault by the Romans – go to www.bbc.co.uk/news/uk-scotland-south-scotland-37260157 … which follows on from the News post last week.

At www.bbc.co.uk/news/uk-scotland-37290979 … a Neolithic or Early Bronze Age decorated stone (cup and ring markings) was purposely buried by archaeologists back in 1965, ostensibly to avoid vandalisation. This appears to have mainly being people walking over the stone as a result of not understanding its significance from a historical angle. It is located in the middle of housing at Clydebank so was buried in order to stop foot wear (and others inclined to add their own doodles). It is now being dug up again by archaeologists who wish to publicly display it in the community.

Over at http://popular-archaeology.com/issue/summer-2016/article/archaeologists-… … where again we have cup and ring markings on a stone. It was re-used and incorporated into a Late Bronze age structure (1200-800BC) that presumably was still in use in the subsequent Iron Age. Cup and ring marks in Portugal, as in Britain, belong to Neolithic, or the Portuguese Copper Age (third millennium BC). The LB age fortified hill top enclosure occurs in a rich agricultural region and consists of a double wall of stone and evidence of fire hardened clay and wood (and it is thought the complex was set alight for unknown reasons). Bastions, ramps, platforms as well as an exterior wall built on what was a buried ditch (from previous occupation on the hill top) seem to suggest a fear of attack from predatory groups.