At https://wattsupwiththat.com/2016/10/13/study-extraterrestrial-impact-pre… … which is a strange web site to find an article about comets striking earth (as they were less than sympathetic with the Younger Dryas boundary event hypothesis). Normally, Watts is quite sceptical of anything involving objects from outer space – but apparently the scientists behind the study came up with the global warming add-on (which is obligatory if your funding relies on mentioning a connection even though fossil fuel emissions were in short supply at the time). This is the sole reason it is on the blog.

The comet strike may have triggered the Palaeocene-Eocene thermal expansion, a rapid warming of the earth that was naturally attributed to a sharp intake of co2 into the atmosphere (56 million years ago). The idea of an injection of co2 is the assumption – it allows the authors to peddle the CAGW meme without qualification. In a catastrophist interpretation (and a clout by a comet is a catastrophist event) we may conjecture that the equator may have diverged and that from a Euro- North American centricity this equated with global warming rather than regional warming. In fact, we actually know that the equator moved as continental drift was ongoing – we don't even have to inject the idea of a pole shift as an impact could have increased the rate at which the plates move (in a burst of movement rather than a small constant movement).

However, this is not the most interesting part of the story from a catastrophist viewpoint as the story develops from the discovery of micro tektites in a sediment core. What the researchers were looking for was the tiny shells of foraminifera as these are used to estimate ocean temperatures in the past. If you don't know how this works look up Wiki or some other internet source – or go to the bottom link (below). Geologists wash sediments through a sieve – usually a succession of sieves with smaller and smaller holes in order to weed out the particles. On this occasion they did not bother sieving to the extent normally undertaken which is one reason why the micro tektites were spotted. The other reason was that normally the collecting trays are black – which makes sense when you looking to spot white foraminifera shells. Once the team realised they had a few black microtektites in their tray they switched to white trays (in order to pick them out more easily). They went on to find up to 3 microtektites per gram of sediment examined (from the Paleocene-Eocene).  One has to wonder on how many occasions such micro fossils are missed simply because the sorting trays used are the same colour as the fossils- or because the scientists are looking for something specific and ignoring the nature of what else might have collected via the sieving process. In any event, sieving is normally a lengthy and labour intensive process and microtektites should be picked out by at least one of the researchers – as happened on this occasion. We can hardly expect microtektites in every sediment core – but what other goodies are never mentioned in the literature. The findings are laid out in the journal Science (Oct 14th 2016) but see also www.palaeontologyonline.com/article/2011/the-paleocene-eocene-thermal-=m… … where you find that dwarfing of animals occurred, and leaves have been fossilised with insect feeding holes intact. 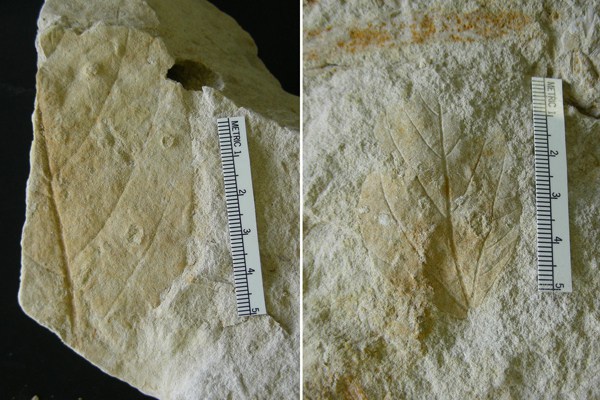 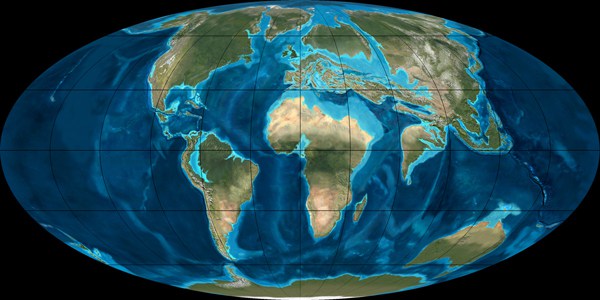 … in the first picture we have the fossil leaves and in the second image the position of the continents per Plate Tectonics theory (at the time of the Palaeocene-Eocene transition) (which of course is a result of modelling).