Both William and Robert sent in the link to a story in the Daily Telegraph newspaper – see www.telegraph.co.uk/science/2017/04/21/ancient-stone-carvings-confirm-co… … researchers in the Engineering department at Edinburgh University have been looking at images and symbols carved on the stone pillars at Gobekli Tepe in SE Anatolia, in order to see if they could be linked to constellations in the sky – and they now think they are. It is a simple theory and if true, quite a dramatic discovery – people recording star clusters and their resemblance to animals they were familiar with in their daily habitat. Whilst this is a reasonable position to start their investigation as we know that the constellations were recorded on Ice Age art in European caves, it also implies a narrow focus. Therefore their interpretation can be open to dispute – and no doubt will be. Other scholars will challenge their interpretation and refuse to recognise the pillars record phenomena seen in the skies. Having said that, as a neo-catastrophist web site this is an issue that interests us greatly, especially if this research is based on the Clube and Napier Coherent Catastrophism model (and it undoubtedly is). It also brings the Younger Dryas Boundary event into focus – in the UK. It has been largely ignored, although the occasional lurid headline, like this one, in newspapers, has periodically entered the public eye (but to no great degree). There is a large dollop of scepticism that anything catastrophic happened 13,000 years ago – or at any other point in time. Archaeo-astronomy was effectively neutered years ago and the legacy of Alexander Thom has been airbrushed out of universities etc. In SIS circles it is occasionally aired but not with any enthusiasm as such, which is a great pity. Thom still has his admirers but not in Velikovskian circles in the US. Several articles critical of Thom were published in Kronos and other Velikovskian journals and the Americans appear to have favoured the Saturnian model of solar system history, in which Thom posed a distinct threat. He was convinced stone circles were built to look at the heavens, and in particular the orbit of the moon. If the Gobekli Tepe stone circles were built ot observe the sky and then it would mean re-opening and having another look at what Thom had to say – which means mainstream will strongly resist such an explanation.To make matters worse, the Daily Telegraph author, makes a deliberate link to Graham Hancock's book, 'Magicians of the Gods' (reviewed on the News a few years ago) which will further upset mainstream archaeologists and astronomers. 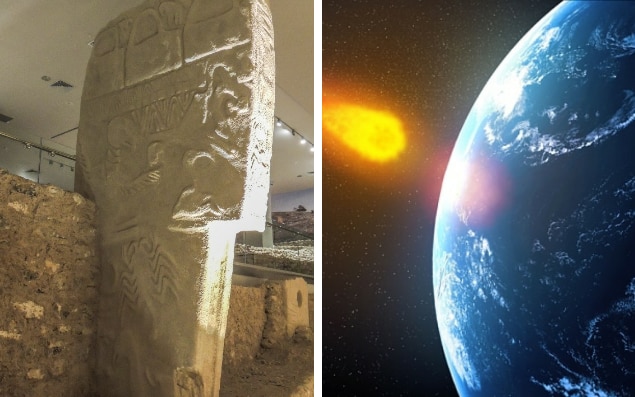 The main subject of study was the so called Vulture Stone at Gobekli Tepe. It has a number of strange animal figures carved on it and they set about identifying these with constellations using a computer programme to reproduce the night sky over the Levant and what is now Turkey 13,000 years ago – the point in time when the Younger Dryas episode kicked in. Various symbols were interpreted as astronomical in nature and they claim it records a comet (fragments, or just a heavy storm of meteors) which is the icing on the cake for the Younger Dryas Impact theory people.

Martin Sweatman of Ediburgh's School of Engineering led the research and sees it as backing up a recent paper on the discovery of widespread platinum occurring across North America at the Younger Dryas boundary. Platinum is more commonly associated with asteroids rather than comets – but as comets are now seen to be rocky in some circumstances there is perhaps a certain amount of blurring on what constitutes one and the other. You can read the full paper on platinum by going to http://cosmictusk.com/comet-research-group-nature-widespread-platinum-yo… … where George Howard has provided access. Sweatman also thinks symbolism on the pillar indicates Gobekli Tepe was built as an observatory to monitor the night sky. The site is also regarded as the world's first temple – and at this juncture we are at the point where religion may have an origin in phenomena in the sky. The site dates from around 9000BC – but is still being investigated (and there may be deeper and older layers to reach). This is 4000 years after the Younger Dryas kicked in – so criticism may centre around the dates. Even more surprising, Sweatman suggests there was a long term change in Earth's rotational axis.

The same story can be read at www.q-mag.org/what-the-vulture-stone-says.html … and provides us with a nice image of the vulture stone. 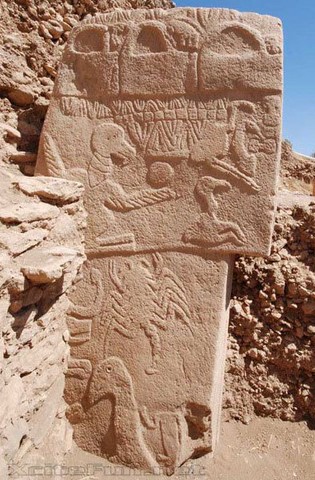 The symbols are said to record a swarm of comet fragments (or meteors) hitting the Earth at the time of the Younger Dryas Boundary 13,000 years ago. It makes the point 'engineers' studies the markings – not archaeologists wedded to their ritual theories when it comes to anything out of the ordinary, or come to that, astronomers. It more or less quotes the Telegraph piece verbatim (or near enough). However, it then digresses as it is followed by an appraisal of what it might all mean (which is worth reading in full at the link). It provides the full article by Sweatman and his co-uthor, Dimitios Tsikritsis, which was published in the journal, Mediterranean Journal of Archaeoastronomy and Archaeometry. Excellent. The full article is also provided by George Howard at http://cosmictusk.com/datestamp-worlds-oldest-monument-memorializes-youn… … and you might like to read the comments from some of the regulars at Cosmic Tusk – always worth having a look at as some of these people are ardent fans of the comet research group.

The Q-Mag link provides a very good piece of background info on the Clube and Napier theory on the origin of the Taurid meteor stream. This, it claims, is accepted by mainstream astronomers (not all of them of course and mainly in the UK). Taurid origins in Comet Encke and it's progenitor are not regarded as unreasonable. However, its consequences are open to dispute – and sometimes fiercely so. It is thought that widespread geological and archaeological evidence is lacking. However, this depends on how you interpret archaeology. You won't get an archaeologist claiming fire from the sky obliterated Bronze Age civilisations across the Near and Middle East. They won't even posit an earthquake in fear of being ridiculed – the fate of Claude Schaeffer. His creer did not come to an end but the resistance to the idea of earthquake storms effectively neutered his subsequent research. The researchers are also keen to point out geological events such as the Scablands flooding as proof of rapid ice sheet melting (and various other traces of meltwater flooding in N America and Europe). The Younger Dryas is most famous as an abrupt change in climate (the Younger Dryas episode itself which lasted over a thousand years). It is as yet unexplained sufficiently although a switch in the ocean conveyor belt system is a popular explanation (some people taking it as gospel). What is ignored here is what caused the onset of the switch in ocean currents – a trigger point. Blaming a consequence of the Younger Fryas event the cause of that event is what is known as circular reasoning – round and round we go. It avoids looking at other explanations and is a neat uniformitarian trick to hobble outlandish ideas, such as catastrophism. One explanation for the switch in ocean currents is an influx of fresh water from the ice sheets, which again ignores what actually caused the ice sheets to rapidly melt etc.

Another archaeological mystery is the disappearance of the Clovis culture at the Younger Dryas boundary and the extinction of large Pleistocene herbivores such as the mammoths. This is of course circumstantial – but the demise of large animals (megafauna as they are known) is another peculiarity of this period. The animals which thrived in the Holocene were much smaller versions – whether it was musk ox, bison, or even deer, an altogether strange part of evolution. No doubt it involved adaptation to a less verdant environment – the disappearance of Pleistocene grasslands that dominated N America and large parts of Eurasia, but it still represents an odd thing to occur. Giant deer were succeeded by deer of the dimensions we are used to in the modern world. The we have a distinct geological layer, the so called black mat layer (or grey deposits). This is found in N America and in northern Europe – which ties in Han Kloosterman's research into the Younger Dryas Boundary event. He always reckoned that he was taken to a black mat layer by a geologist in the UK (mentioned in earlier News postings) below Pitstone Hill on the Chiltern escarpment. When he came to revisit the site the geologist had died and the workings had disappeared or had become overgrown. However, the same black layer was found by geologists in a stream valley not many miles away, not far from Watford (without a connection being made to the Younger Dryas event) and similar black layers have been found in Kent. Kloosterman famously researched the horizon in the Netherlands and wrote extensively on it – see his obituary in SIS Review 2016:3 and 2017:1. Most of the papers, both for and against the Younger Dryas Boundary event, can be read in full at http://cosmictusk.com (just scroll down).

Gobekli Tepe has been excavated over the last 20 years under the directorship of German archaeologist and enthusiast Klaus Schmidt. He unveiled a sequence of circular enclosures (or roughly circular) consisting of upright megalithic slabs and rough walls. Low and high relief carvings adorn the slabs of stone (pillars with a T shaped slab on top) which include zoomorphic figures in various postures as well as abstract symbols. The earliest calibrated date of organic content in wall plaster has come up with a date of 11,530BP (11,500 years ago), a date just after the end of the Younger Dryas episode. Hence, we stil have a gap of 1500 years between Gobekli Tepe and the Younger Dryas boundary – but then again a stage of development must have taken place and if the event involved widespread mortality it would have taken several generations to recover.

Conclusions to the article are that if cannot be confirmed th Younger Dryas event was caused by a cometary/meteor encounter (and indeed the Older and the Oldest Dryas events as well). A connection with the Taurid complex is left unproven. What can be said is i) it is very likely the people of Gobekli Tepe had been looking at the sky over a long period of time, and ii) there is consistent pattern of interpretation of the symbols which could support that catastrophism. Okay, once again inconclusive – but it is adding up all the coincidences and weaving them together that makes it a possibility worth considering and investigating further (and this is what will happen).