At https://phys.org/print414218228.html … a new species of fungus gnat found in a piece of amber from India closely resembles its relatives in Europe (found in Baltic amber). This is said to disprove the concept of a strongly isolated Indian subcontinent – one of the tenets of Plate Tectonics. India is supposed to have been an island that bumped into Asia – a quite hard bump in fact as it is supposed to have produced the uplift of the Himalayas. This little gnat has big implications seem to suggest India may always have been part of Asia – and was never an island moving across the Indian Ocean after cracking loose from Madagascar and Antarctica etc. The gnat is also known from Baltic amber and presumably existed in the area separating the two regions as well – western Asia and the Middle East. India is thought to have been part of Gondwanaland, a theoretical land mass composed of southern hemisphere land blocks such as South America, Africa, Madagascar, Antarctica, India and Australia, breaking up and drifting apart in a long uniformitarian process. Indis is thought to have begun its journey around 130 million years ago, coming to rest attached to southern Asia around 59 million years ago. One immediately notices the latter date is shortly after the asteroid strike around 65 million years ago (short as in geological time) and the former date is near the beginning of the Cretaceous period (the last phase of the dinosaur era). The Cretaceous is a peculiar period in that in the UK it is dated mainly by the chalk geology – which is very deep. These remains of coccoliths, the shells of very small marine creatures, are thought to have accumulated over a very long period of time – in a shallow sea situation (the Atlantic was yet to attain ocean status). What would happen if the chalk was laid down more rapidly – perhaps in a series of stages as the nature of the chalk differs from one layer to the next. Flints in chalk only really occur in profusion in the topmost layer – yet all the evidence is that it was produced on the sea floor (as it occasionally encases other sea creatures such as sponges). It's a complicated issue as the Cretaceous also includes dinosaur remains (assigned to the Cretaceous but of course not found inside the chalk).

The asteroid strike also coincided with the Deccan Traps, a flood basalt geology in India. A connection seems a reasonable conclusion – but in geochronology, there is a bit of a gap. Could there have been a more rapid laying down of sediments in the wake of the asteroid strike? 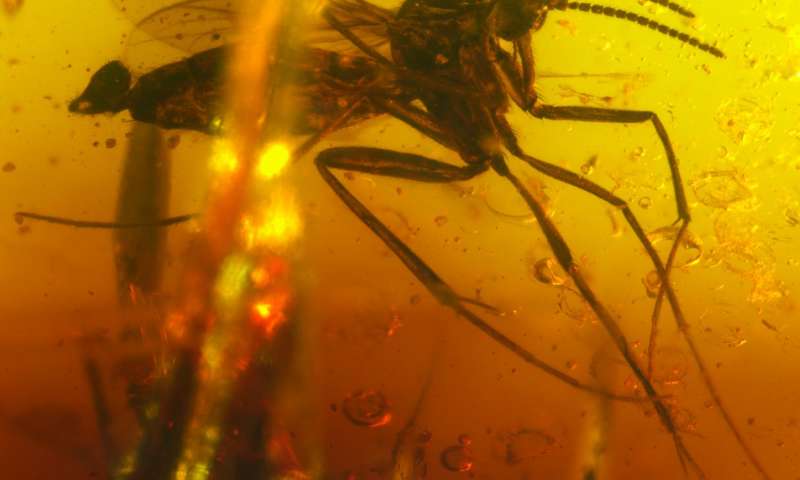 Another interesting thing is that the Cambay amber from India has only been studied for a few years and is unveiling a lot of previously unknown secrets regarding the origins of India's fauna. It is not only gnats that contradict the idea India was an isolated island for 70 million years but other insects in amber have previously been discovered that have  a Euro-Asia connection rather than an African one. This led some people to come up with the highly dubious idea that India was connected to Europe by a chain of islands and flying insects were able to hop from one to the other on the way to the Baltic.