Solar cycle 24 has been relatively quiet for the last few weeks but a huge coronal hole has opened up over the last few days – see www.spaceweather.com July 11th. The weather is already warm. Is it about to get warmer over Europe and North America? An interesting post on this subject is at https://wattsupwiththat.com/2017/07/05/the-solar-harbinger/ .. which is a guest post by David Archibald, one of the people who think a lack of sun spots is going to result in a cooling of the earth system. The article brings focus to the heatwave of 2003 which purportedly was responsible for large numbers of premature deaths caused by excessive heat – a hypothesis that has been disputed. As we are now enjoying a hot summer, at least in south east Britain, and a fairly dry one to boot, it is opportune perhaps to sit up and take notice of what was going on in 2003, solar wise. Archibald's theory is that the Sun played a prominent role and produces various graphs to support his position. It involved a big expansion in solar plasma reaching the earth system. He produces the sun spot data to back up his claims – and it was a very active (quite unlike cycle 24). Laurence Dixon had an article in SIS  on the Sun's activity around this time so a lot of scientists had sat up and noticed – but were apparently drowned out by the CAGW shouting. 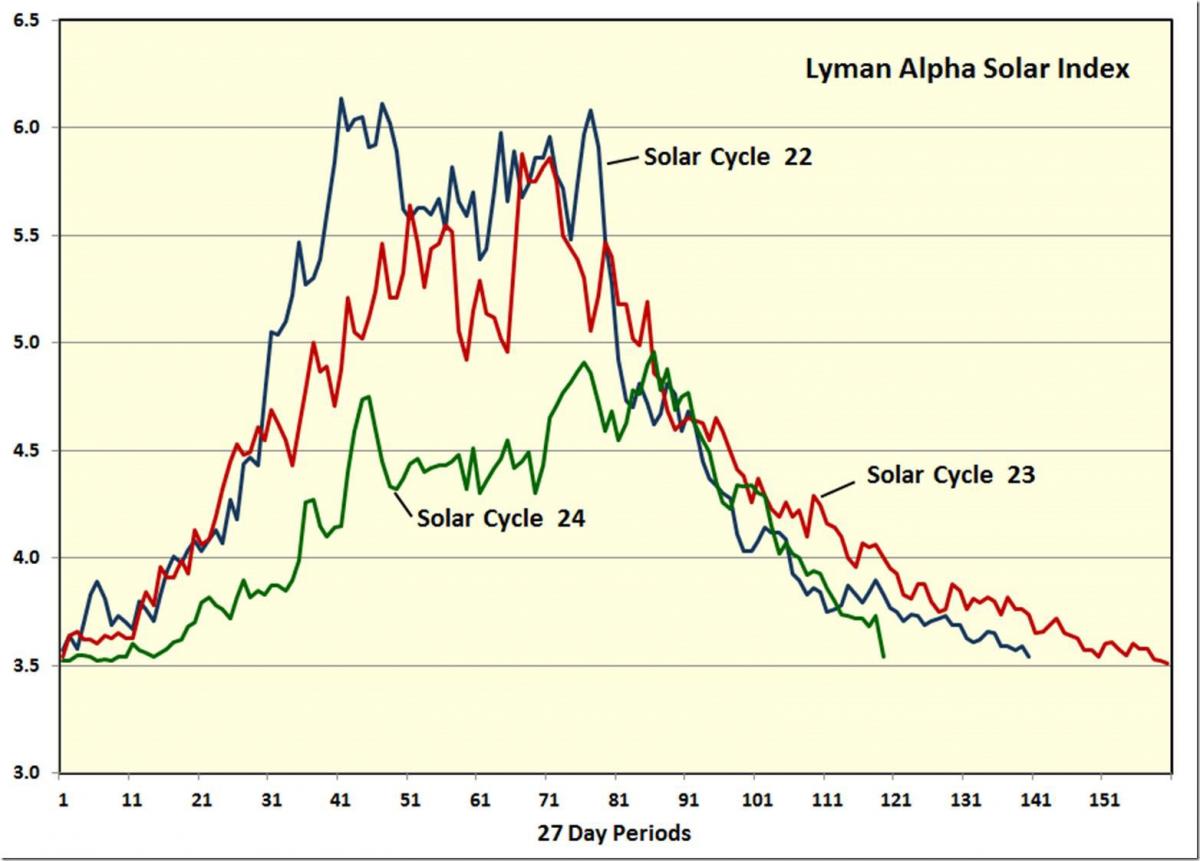 At http://joannenova.com.au/2015/01/is-the-sun-driving-ozone-and-changing-t… … we have a slightly different take on the subject, the theory of Stephen Wilde. This hypothesis overlaps to some degree that of Archibald. The Sun's energy, or should we say, sunlight, is constant. The energy beamed out by the Sun does not vary to any great degree. What changes are the coronal hole mass injections that bring sudden bursts of energy around the solar system, via the solar wind. He asks what is going on and then proceeds to tell us what his theory is – and note that in Archibald's graph above there are two extreme points in the 11 year solar cycles – solar maximum and solar minimum. We are now entering the minima phase, hence the rapid decline in solar activity. Wilde says the spectrum shifts over the course of the cycles. Shorter wavelengths, or UV, at one point in the cycle (which Wilde claims generates ozone in the stratosphere) and longer wavelengths at the other extreme of the cycle (which does not generate ozone). However, the Sun is also sending out charged particles and driving a massive fluctuating magnetic field around the earth, both of which impact on the atmosphere. The Wilde theory is explained in full – but some of the commenters are not convinced. He lays out the sequence as Sun-UV or charged particles-ozone-polar jet streams-clouds-temperature at the surface. When the Sun is more active there is more ozone over the equator and a loss over the poles (the so called ozone hole). I suppose this is a variation on the idea big CMEs disperse ozone from the poles and shift it to mid latitude regions or the equator. Wilde describes it in a less than simple fashion as the jet streams play a prominent role in his theory. These are normally thought to undulate around the earth but in cool periods seem to adopt long loops. They become meridional, the loops wandering from north to south and back and forth, resulting in longer lines of air mass mixing at climate zone boundaries. It's beginning to sound like the BBC weather man but he provides a nice graph of the effect.

… which is no doubt associated with solar activity and worth bearing in mind. In addition, Wilde points out that looping jet streams cause more cloud activity and clouds affect how much sunlight reaches the surface of the earth, and therefore impacts on the temperature at the surface. Wilde is more or less saying that the Sun's UV (and charged particles) modulates the solar heating of the Earth. Is it that simple?

Wilde goes on to extrapolate his theory to account for the Medieval Warm Period and the Little Ice Age (over the last thousand years). Is this flying your theory too high? He visualises more polar zonal jets during the MWP leading to a greater population of people around the world. For example, the Western Isles of Scotland were much more heavily populated than they are today. At the same time agriculture was possible on Greenland. Hence, he theorises, there were no great loops in the jet streams. Conversely, in the Little Ice Age there were a lot of loops and mixing going on as ships logs actually record increased storminess (more so than in the present period). There is nothing in this to contradict HH Lamb, in particular, but other factors seem to be involved – why was the temperature so cool. It may not just be a matter of sun spots and solar cycles.

Meanwhile, at www.thegwpf.com/the-prophets-of-eco-doom-a-perfect-record-of-failure/ … which takes a blast against the intellectuals of the doom and gloom persuasion. The Prophets of Doom – a perfect record in failure. None of the environmental predictions made over the last 45 years have come to fruition. Take for example the words of Nobel Laureate and professor of biology at Harvard, one George Wald, which he made 47 years ago (at the time of the first Earth Day). Earth Day's are intellectual doom and gloom celebrations in which rallying the troops that believe in the coming ecological disaster can all weep together and berate the rest of us for not turning our lights off for a hour. The similarity of this concept with Jewish, Christian and Islamic prophecies concerning the collapse of human society and the imposition of a god driven world order is too obvious to be an accident. Doom and gloom resonates with audiences it would seem. Secular prophecies are all about a clique of the elite taking control, rather than a god, but the implications are the same. Ordinary folk need to be led by the nose and not think for themselves. Their betters are more capable of doing the thinking. Smacks of the herd concept. If you look at a herd of bullocks in a field, one gets up and moves away and starts chomping at the grass and the rest follow him. However, there is always one that goes off on his own – or doesn't budge (not right away that is). He usually has a beligerent look in his eyes. Why have I got to follow that pillock. I like the grass over here. However, he eventually falls in with the others – but this hasn't happened with the human herd. Some humans resist for a longer period of time – and doom mongering is a good example of this. George Wald famously said civilisation would end within 15 to 30 years unless action was taken against problems facing mankind (as he saw them). Of course nothing of such doom and gloom occurred. Civilisation is still thriving. At around the same time, doom monger Paul Ehrlich at Stanford University wrote the best seller, 'The Population Bomb' (which again influenced a lot of people). Westerners were advised to have small families but we ended up without enough people to do the work or pay the taxes to pay pensions and social security payments. Politicians then had the bright idea of importing millions of immigrants – who had never heard of Ehrlich and therefore had ample numbers to share around. Ehrlich's prophesies have also proved absolutely false as global population numbers have increased unabated and we are all still here and farmers are able to feed them all it would seem. Ehrlich filled up his bank balance and is still lauded as a creditable prophet – yet nothing he said has come anywhere near true. What the environmental movement do is move the goalposts. This sounds a bit like those Christian prophets who thought they could use Biblical numbers to work out when the Antichrist would arise. They usually ended up by moving the goalposts, suggesting they had made a miscalculation and a new date for the doom and gloom was necessary. The CAGW people do exactly the same – move the dates forward so that the prophecy is always out of reach by sleight of hand, but within reach of the lifespan of its followers (or their children). Earth Day has been celebrated since 1970, yet we were told 47 years ago that life in the seas (fish that humans consume) would be extinct within ten years. It's a bit like the Arctic ice – retreating but never going away. Polar bears were another species that would not survive – but strangely, their numbers are increasing. The walrus are the same. What are declining are species like the orang utan, impacted by Green Blob alternative fuel policies. Bats are also in decline – caused by the proliferation of wind  turbines (another CAGW piece of virtue signalling that actually produces more harm than benefit). Erhlich should have been ridiculed and laughed at but instead he has received 16 awards over the years – which says a lot about gongs and not enough about science.