Still running with the Moon, subject wise, we www.astronomy.com/news/2017/10/moon-atmosphere … (link sent in by Jovan) where we are told that for 70 million years the Moon had an atmosphere formed by gases as a by-product of volcanic activity.

Over at http://spaceweather.com … (Oct 19th 2017) we learn that astronomers, back in 2016, discovered an object loosely circling the Earth – 2016H03, a faint point of light that travels around the Sun alongside our planet, like another moon (but much smaller). It turns out it is a small asteroid in resonant orbit with the Earth. It is also rotating once every 28 minutes.

Meanwhile, back at www.astronomy.com/news/2017/10/haumea-has-a-ring … it seems that Haumea, an object orbiting in the far reaches of the solar system, has a ring around it. A centaur, orbiting between Saturn and Uranus, also has a ring, as does Chiron (perhaps another Centaur object). 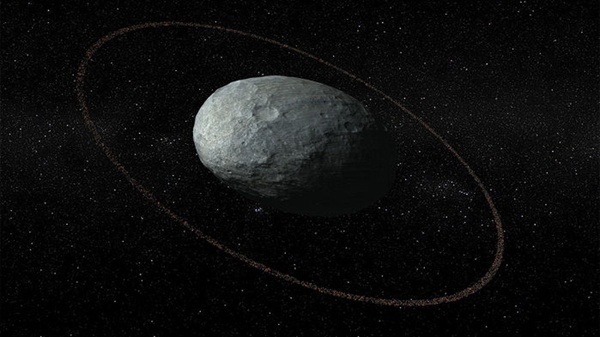 Jovan also sent in a link to this video – got to www.scientificamerican.com/video/is-physics-funnier-than-biology/ … which has the title, 'Is Physics funnier than Biology?'

… and at https://phys.org/print427710893.html … we learn that NASA has extended the Dawn Mission to the asteroid Ceres (which is situated in the asteroid belt between Mars and Jupiter). The spacecraft will descend to lower altitudes than previously, catching a close up look at this dwarf planet (which has similarities with an asteroid and a dead comet). Dawn has been orbiting Ceres since 2015 but not a lot has been said by press release. For further information go to www.dawn.jpl.nasa.gov/mission. In the same general vein you may also like to go to https://phys.org/print427683883.html … which concerns the MAVEN mission to Mars. It seems Mars has a twisted magnetic tail. The twist is probably due to interaction with the solar wind.

A few moments after posting this Gary sent in another link to this story – go to www.dailymail.co.uk/sciencetech/article-5001656/Mars-twisted-tail-NASA-s… … which has a model video and some information on the atmosphere of Mars. The Daily Mail are quite good with their science stories and this one is worth reading. More than 80 per cent of the atmosphere of Mars has been stripped away by the solar wind, it s alleged. Has this got anything to do with the magnetotail. This, it is said, has its own magnetic field, and the apparent twisting, it is conjectured, is all to do with the process of magnetic reconnection – a favourite explanation for magnetic anomalies (and seems to be used when scientists don't really know what is happening). Mars is said to have lost its global magnetic field billions of years ago but some parts on its surface appear to contain 'fossil' magnetic fields that were left behind. However, it is also known that Mars upper atmosphere contains electrically charged particles, known as ions, which flow along magnetic field lines, and the reconnection process forms a pathway into space via the magnetotail – or that is the theory being pushed at the moment. The process also releases energy. Later, we are told the magnetic reconnection theory is part of the model developed to explain the anomalies. They are also looking at how Mars rotation affects the magnetotail in combination with the solar wind, creating the twisted effect.