This information is derived from a study, Oliver and Terry 2019, published in Palaeogeography, Palaeoclimatology and Palaeoecology (see http://notrickszone.com/2019/02/07/oyster-evidence-affirm-sea-levels-wer… … ). Basically, oyster evidence affirm that sea levels were up to 3.8m higher (in Thailand) 6000 years ago (roughly around 4000BC).

Oyster remains have been found encrusted in rocks 2.5 to 3.8m above the present mean sea level (a series of stranded shore lines). 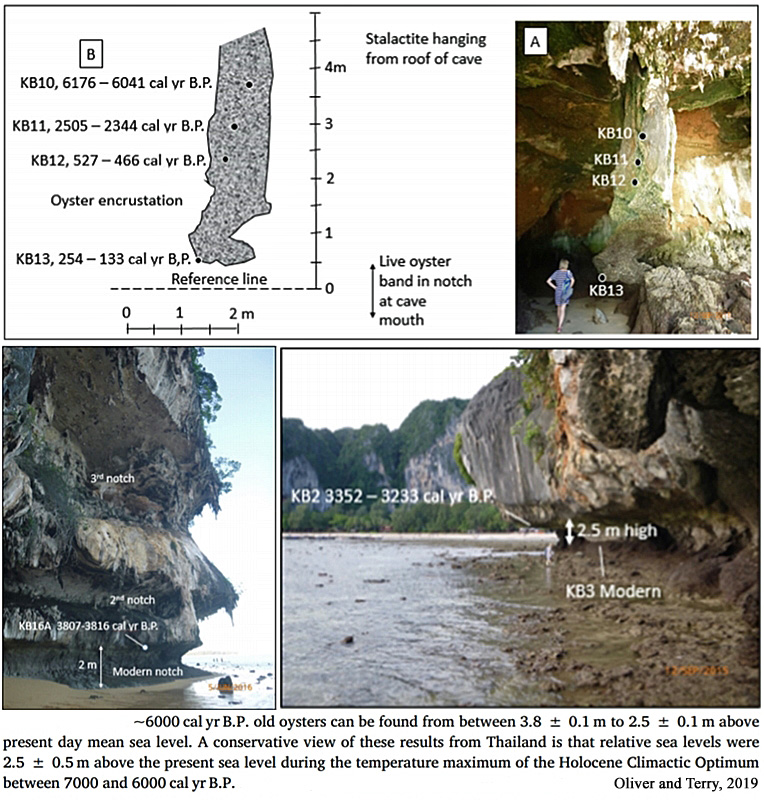 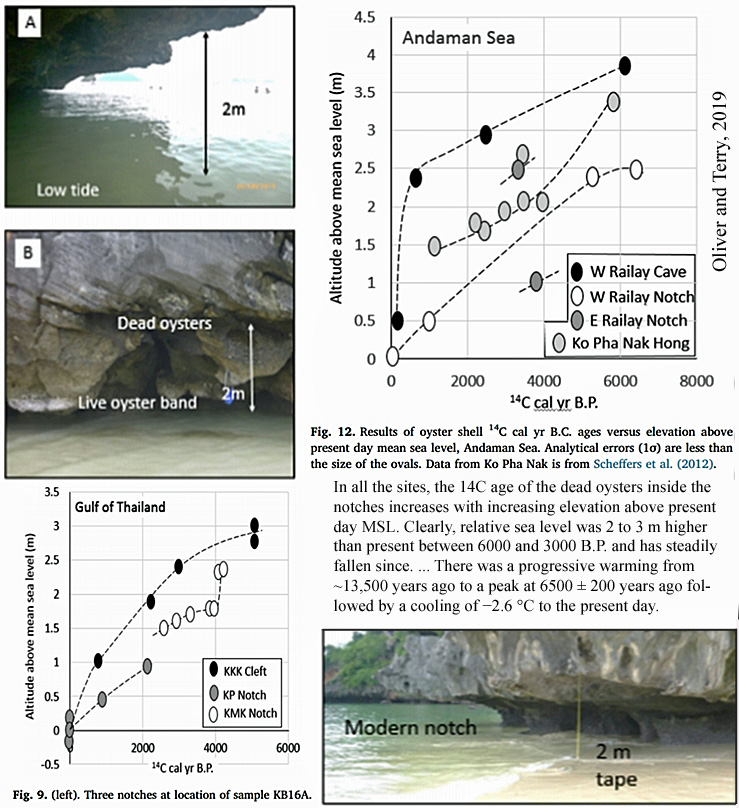 The higher sea levels were found in Thailand, and located, it would seem, down to 3000 years ago (1000BC). It has continued to fall since that date. This is of course all part and parcel of the Mid Holocene Warm Period and the warm phase of the Late Bronze Age (known as the Minoan Warm Period). There is a 1m wide line oyster bed (or what were once live oysters near the surface of the sea). In a more sheltered site inside a bay, known as Ko Pha Nak, oyster shells are found between 3.2m above modern sea levels.

In the comments a geologist claims he has seen similar evidence in Dubai. Another commenter makes the point the crust of the Earth can change vertically – in both directions (up and down) for reasons that are net necessarily determinable – ie we don't know why. See also http://notrickszone.com/wp-content/uploads/2019/01/Vertical-land-motions… … and see also https://doi.org/10.1093/gji/ggx142 … which claims ice melt from glaciers is responsible for vertical land movements – and mainstream also point a finger to rebound from glaciation (but not in tropical regions such as Thailand).

Another commenter points out the notching of the rock face suggests sea levels drop occurred in unequal steps (with some layers lasting longer than others). Another says there is similar evidence in the Bay of Campeche near Fronterra (elevated beaches). It seems to be a world wide phenomenon and is certainly not confined to eustatic bounce back (and the opposite process). The cause of sea level rise appears to be still open to question and the mainstream song sheet may be too simplified.