At http://spaceweather.com August 10th 2019 … a new source of space radiation  has been discovered by researchers from UCLA. A 'natural' particle accelerator just 40,000 miles above the surface of the Earth is producing killer electrons that move close to the speed of light. This means that astronauts leaving Earth for Mars could be peppered by radiation coming at them from behind – from the direction of their home planet. NASAs THEMIS spacecraft ran across the particles in 2008 not far from the place where the solar wind slams into Earth's magnetic field. Shock waves at that location could accelerate particles to high energies – but not as high as they are. Particles coming out of the Earth-solar wind interface have energies up to 100,000 electron volts, ten times greater than previously expected. It seems that when the solar wind meets Earth it forms a shock wave around Earth's magnetic field with a shape like the bow waves that form ahead of a boat moving through water. Within this bow shock immense stores of energy can be suddenly released akin to the sonic boom of an airplane. Some structures are shocked not just the once but two times or more, undergoing mirror like reflections within the bow shock that build energy to unexpected levels. Most of the boosted particles shoot back into space and away from the Earth. It seems that similar particles have been detected near Saturn. In fact, this kind of acceleration could be happening throughout the cosmos, we are told, from supernovas to solar storms. 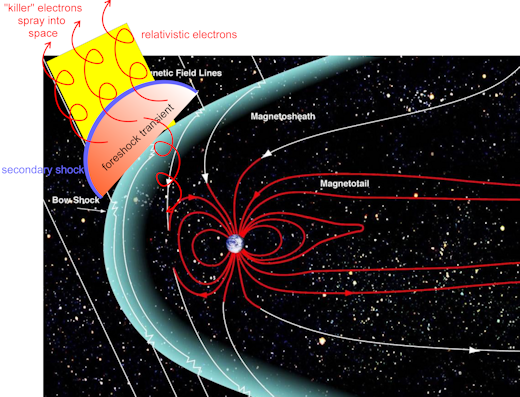