Robert sent in the link to www.dailymail.co.uk/science-tech/article-7363455/ … with the comment, discharge lightning on Earth emits X-rays. It seems that if humans were able to see gamma-rays they might see the night sky would glow brighter than the daytime. This is the manner in which NASAs Fermi Gamma Ray Telescope sees our region of space. Currently, gamma-ray observations are not sensitive to seeing the shape of the Moon very clearly – or any of the surface details. It detects a prominent glow centred on the Moon's position in the sky. See also https://sciscomedia.co.uk/moon-brighter-sun/ … as the particles that make up cosmic rays are electrically charged they can be detected but the Moon does not have its own magnetic field. As a result, even low energy cosmic rays can reach the surface turning the Moon into a space bound particle detector. When cosmic rays strike they interact with ryolith to produce gamma-ray emissions. Gamma-rays are a form of electromagnetic radiation similar to X-rays. Gamma rays are also emitted by naturally ocurring radioisotopes such as potassium 40 and carbon 14 (which is quite interesting as they are used for dating purposes). These are found in rocks and soil, and in our food and water etc.

At https://archaeologynewsnetwork.blogspot.com/2019/08/jurassic-world-of-vo… …. a previously unknown 'Jurassic World' of about 100 ancient volcanoes buried deep in the Cooper-Eromanya Basin of central Australia, where oil and gas are produced (but at a somewhat lower level in the rocks), has been uncovered. The volcanism is said to date back 180 to 160 million years ago and is found underneath hundreds of feet of sedimentary rocks. In other words, lots of things have been happening since the volcanism. However, it seems that although volcanoes are usually associated with plate boundaries, on this ocassion they are not. Instead, a volcanic hot spot is being invoked and the volcanism is being compared to the Deccan Traps. See also https://wattsupwiththat.com/2019/08/18/hidden-jurassic-world-buried-unde… … which is written by a very mainstream thinking geologist who spent most of his career in the oil industry. The first link doesn't really get into the hot spot but this link does. 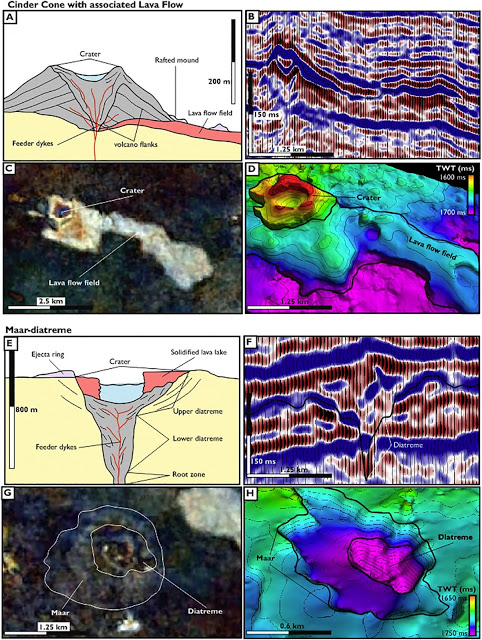 At https://archaeologynewsnetwork.blogspot.com/2019/08/researchers-study-la… … where we have a big impact crater beneath Chesapeake Bay attributed in this news release to an asteroid strike – at 35 million years ago. 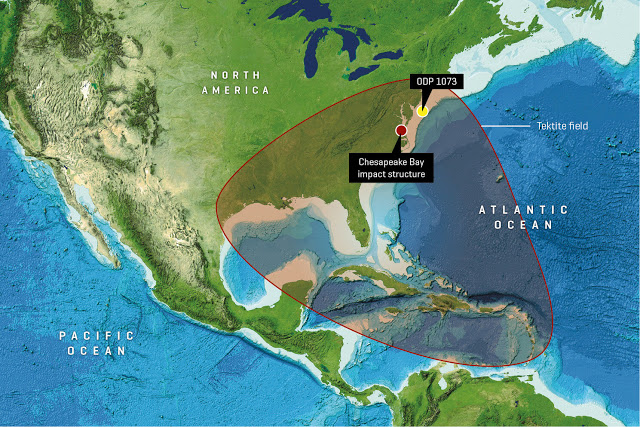