In 1973, the Director of this Conference, Dr Euan MacKie, outlined the controversy in a New Scientist article which concluded: “In summary, Velikovsky has achieved a remarkable success in forecasting otherwise unexpected scientific discoveries. For this reason alone it is difficult to see how there can be any further justification for refusing to consider and actively to test his ideas – no matter how unpalatable they may seem.” These Proceedings represent the beginning of an attempt “actively to test” some of Velikovsky's ideas and to cut through the prejudice surrounding them.

Over recent years, specialist research into Velikovsky's theories has been increasing steadily and a substantial number of authoritative papers have been published. The problem lies in the fact that the climate of opinion ensures that this research is excluded from the established journals and thus denied the influence which it should have on the larger debate. Perhaps these Proceedings will also help to build a bridge between “mainstream” scholars and that minority of their colleagues – described in the Times Literary Supplement of 26 June 1976 as “a powerful force in the undergrowth of academe” – who have had to pursue their investigation of Velikovsky's work outside the established journals and institutions. 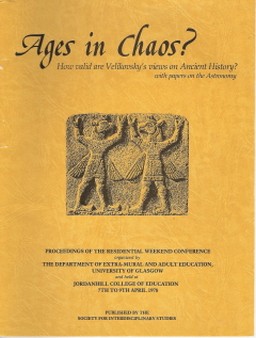 The Proceedings, with complete papers, can be obtained as a back issue (SIS Review VI:1-3) from the SIS Book Service.