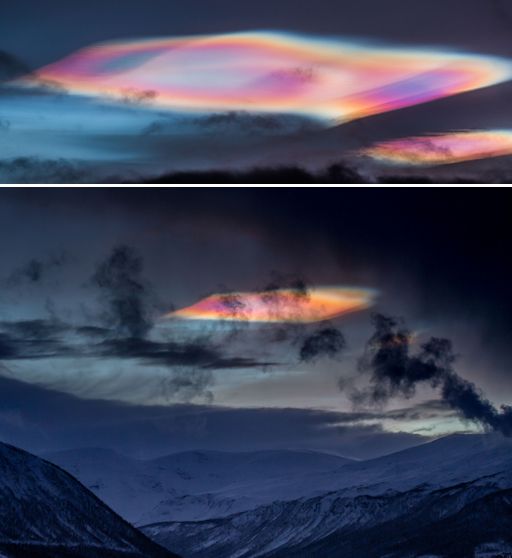 polar stratospheric clouds (clouds in the stratosphere but situated above the polar circle) are colourful – not like the grey and dreary clouds we get over the UK and Ireland. These were taken at Tromso in Norway by Truls Triller and you may note that at this time of the year the Arctic is in night time lock down – for winter. The image was taken at what is elsewhere mid day but it is still dark in Tromso. These clouds are also known as nacreous clouds.

We are also told that a geomagnetic storm struck the Earth's magnetic field on December 14th – in a double jolt that sparked 9 hours of heightened electro-magnetic activity in the ionosphere culminating in lots of aurorae around the Arctic Circle. This week has been extremely warm for the time of the year – is there a connection. The BBC has virtually been getting very excited by the mild weather and daffodils in bloom in december. The Met Office are blaming tropical weather coming up from the direction of the Caribbean but isn't this what happens when a great amount of heat is added to the earth system – it goes into over time in order to offload some of the excess at the poles. This is how the heat of El Nino events is dissipated from the system – but at a slower rate. Blooms of energy with an origin in the solar wind are kicked out of the earth system in a much quicker fashion. As we have had a number of these over the autumn, in November especially and now in December, have they served to mask the super El Nino that was expected to warm the planet up like putting lunch in the microwave?