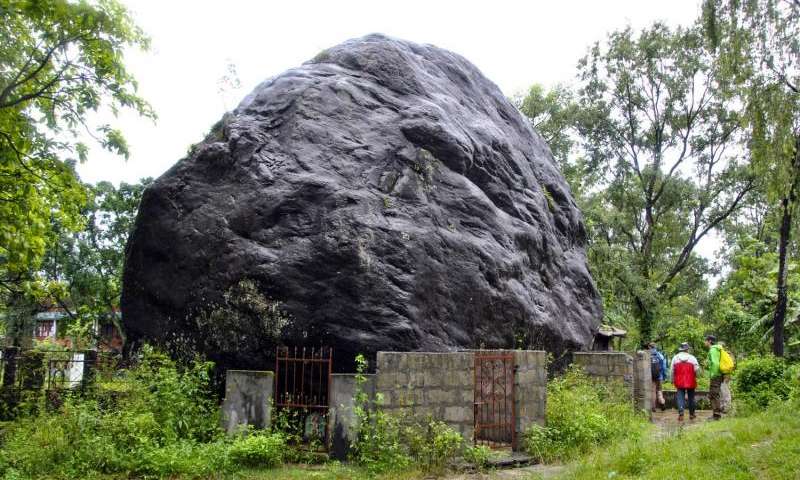 The recent earthquake in Nepal caught the headlines around the world but it does not appear to have been anything particularly special in the grand scheme of things as Nepal had major earthquakes in the past – for example in 1100, 1255 and 1344AD and these triggered large scale land collapse, mass wasting, and redistribution of material by catastrophic debris flows on the mountains. In fact, Pokhara, the second biggest town in Nepal, is built on a massive debris platform left behind by a medieval earthquake. The debris consists of gravels, rocks and sand that have slipped down from high mountain locations, as much as 60 km of land slip – see http://phys.org/print369498942.html

The large boulder in the image above has a diameter of 10m and weighs 300 tons. Scientists measured the concentration of a Beryllium isotope on the top of the rock, produced by cosmogenic radiation (or perhaps by lightning) which came up with a date of 1681 – possibly toppled by a shaking of the earth rather than by a debris flow.

At http://phys.org/print369506315.html … in contrast we are told fewer landslides accompanied the severe earthquake of April 2015 in Nepal (findings in the journal Science). There were no large floods from glacial lakes yet there were still some 9000 fatalities.