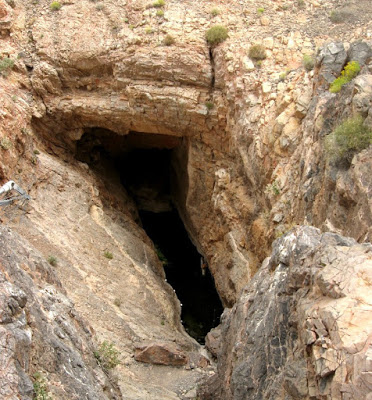 Old Nick gets about as we have a Devil's Hole and a Devil's Punchbowl over here in the UK. At http://archaeologynewsnetwork.blogspot.co.uk/2015/12/a-climatological-tr… … we have Devil's Hole in Nevada, situated on the edge of Death Valley in the Amargosa Desert and yet the narrow crack in the rock, above, leads down towards an underground water reservoir. Calcite minerology is produced by precipitation in the warm water and deposits a thick crust on the walls of the cave – some 150m deep. These deposits offer a unique record of climate over thousands of years. Cores are drilled into the calcite and these are measured by what is said to be 'state of the art' methodology.

In deeper layers of the calcite they came across what they thought was evidence of a magnetic reversal event. The last time earth's magnetic field turned 180 degrees, according to the uniformitarian model, was around 780,000 years ago – and this is presumably used as a means to anchor their 'robust' dating methodology. We might ask – what if magnetic reversals had occurred prior to that date – how would this affect their overall dating strategy? The date of 780,000 years ago is derived from a series of purely uniformitarian marker points, one of which is changes in oceanic oxgen isotopes (in plankton). There is also the possibility that movements at the axis of  rotation leave a localised signature rather than a global signature – which may explain why the Gothenberg reversal event is not found outside Scandinavia. In other words, there could have been a localised event that is apparent in a cave in Nevada but which is entirely absent from surrounding regions. The potential for error is enormous – but we are assured the methodology is reliable. In that case we may note the discovery that is was wet in Nevada and Death Valley 20,000 years ago, coincides with the Late Glacial Maximum. This may imply the climate at that point in time was somewhat similar to that of southern Canada nowadays, on the basis the ice sheet reached much further south than it does in the modern world. As such we may further note this would bring Nevada somewhere close to the track of the jet stream, and explain the wet weather.

The calcite record can therefore distinguish between wet and dry periods of climate and further, we learn the research took place because the existing climate records of Nevada appear to conflict with data obtained elsewhere in the world, including oceanic sediment cores (and perhaps the ice cores from Greenland). What is this telling us? Are climate records in Nevada out of sync with the uniformitarian time scale?

At this point in time we might have discovered why scientists descended into the Devil's Hole to drill some cores in a crust of calcite on cave walls – to get the climate record in sync. By using a uniformitarian methodology, involving the last magnetic reversal event as a starting point, the results should absolutely come out very close to the ocean sediment cores (as they are what was used to date the magnetic reversal in the first instance). It is said the new data shoud fill in gaps in the record but not exactly. All will be revealed in future publications.