Jovan sent in the link – www.skyandtelescope.com/astronomy-news/amazing-new-radar-views-of-astero… …. 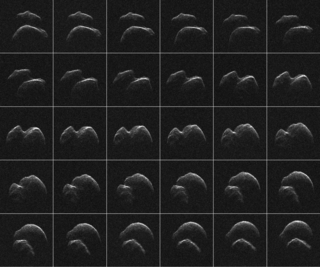 the image is a series of radar images of the near earth asteroid, which show how it is rotating as it goes along, and it's shape, somewhat like the Rosetta comet, 67P. This is asteroid 2014 JO25 which sailed past the earth in April 2017. It was recorded by NASA using radar imaging technique. It has a roughly 3 year orbit. This is somewhat similar to Comet Encke – but is it on a different trajectory? It is described as an asteroid rather than a comet – or comet fragment. The link provides some speculation on what caused it to have a plastic bath tub duck like shape, none of which sounds very convincing. As comet 67P also had a duck like shape can we speculate and suggest it was caused by outgassing as the object was buffeted by the solar wind.