The Chinese have jumped big time into the global warming controversy – see for example https://tallbloke.wordpress.com/2017/08/09/warm-periods-in-the-20th-cent… … or at https://wattsupwiththat.com/2017/08/09/warm-periods-in-the-20th-century-… .. with both derived from a Phys Org press release. Warm periods in the 20th century are not unprecedented during the last 2000 years – in China. They use tree rings, lake sediments, ice cores, stalagmites, corals and historical documents to come to their conclusions. Professor Quansheng Ge of the Chinese Academy of Sciences and his research team have reconstructed a 2000 year temperature proxy graph … 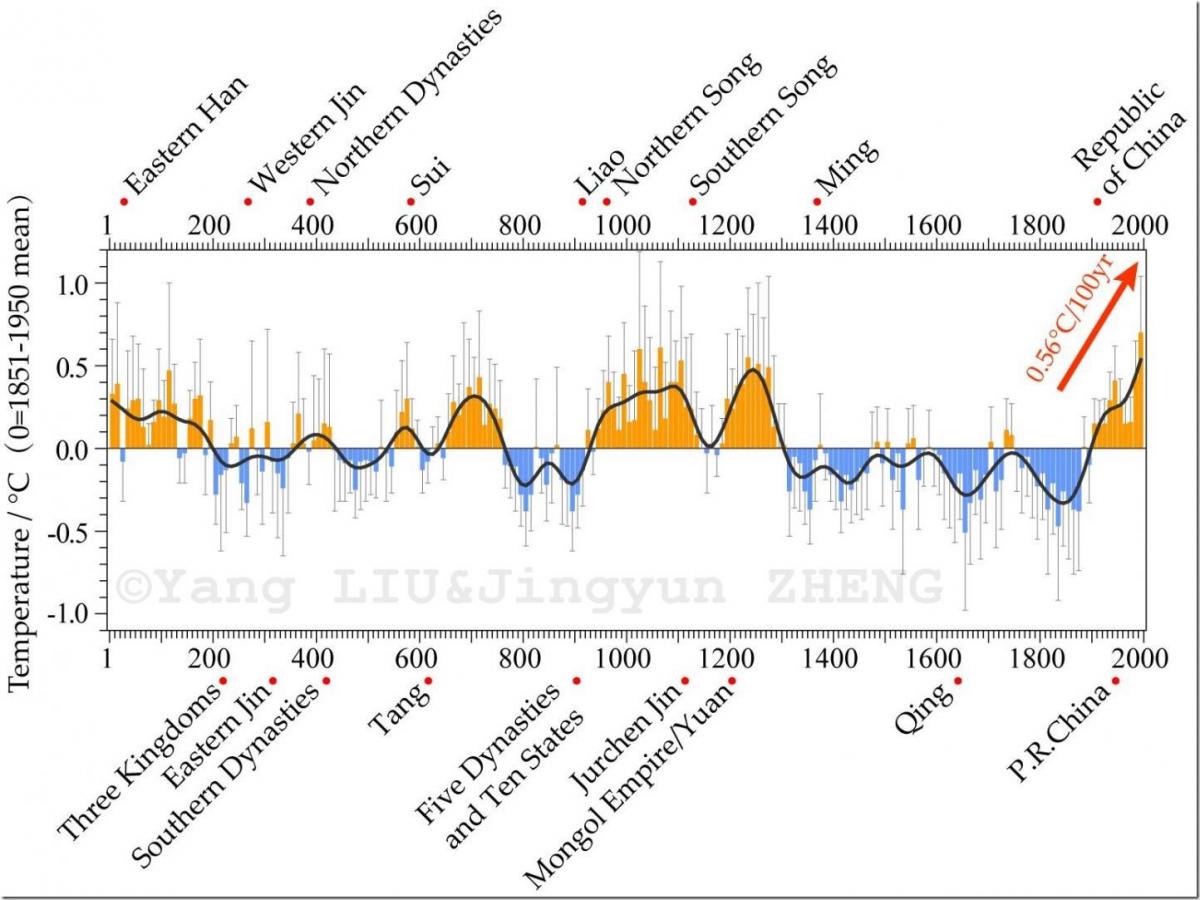 … which begins in the middle of the Roman Warm Period, coinciding with the Han dynasty in China. The graph shows how climate has changed over that 2000 year period but inadvertently has an added red uptick approaching AD2000 (presumably the obligatory requirement and hand wave towards CAGW) that is not supported by the graph itself.

It is interesting as the cool and warm periods coincide with changes in other parts of the world. One cooling episode I had not noticed previously was a dip around AD600-630 – which is when the Islamic belief system was set in motion. The Tang dynasty coincided with the warm period that followed (coinciding with the Middle Saxon period in Britain and the Abbasid dynasty in the Arabian Islamic empire phase of expansion. However, a warming up of temperatures is dated from AD550 to 750 which includes that short cool blip, an average of temperature which accounts for its missing nature in other studies. Other warm periods are at 950-1300 (which also includes a short dip in temperature prior to and in the early 13th century (which accounts for the lack of pasture in Mongolia during the formative years of Genghis Khan). The return of warmer weather coincides with the Mongol dynasty in China under Kublai Khan. In other words the Chinese are telling us that the Roman Warm Period and the Medieval Warm Period are quite similar to 20th century warming and nothing out of the ordinary is happening in the modern climate. This will prove interesting in the long term as environmentalists are hoping China will take up the baton in providing the money to fuel CAGW in the near future (after Trump opted out of the Paris agreement). I suspect the Chinese are fully aware CAGW is all hype and no substance so it will be interesting to see which way they bat the ball when it is bowled at them – and overtures by NGOs have already been aired (and ignored). In another Chinese study people living in the eastern half of China (along with most of the factories and coal fired power stations) have seen an increasing trend over the last 20 years – of cooling (see www.thegwpf.com/one-billion-chinese-are-living-through-a-20-year-cooling… … which caused EM Smith to comment, tongue in cheek and with a twinkle in his eye, 'just after Trump says no money from US for UN Paris scam the Chinese start producing valid science showing its normal climate. He says we can generalise from this – money causes global warming. The cure is to cut off the money stream'.

Getting back to earth and away from politics (although William forwarded an interesting link the other day, go to www.yahoo.com/news/scientists-circumvent-trump-release-climate-change-re… ) the Chinese graph has the Roman Warm Period coming to an end around AD200 and a cooling trend dominating from AD210 (which actually fits in with documentary evidence of climate change in Roman history). Through most of the 3rd century the empire had problems with rebellions and political shenanigans in Rome and elsewhere, culminating in Britain with the career of Carausius, an interesting fellow and a weather vane for the fortunes of the Romans in this period, in NW Europe. Sea levels rose dramatically over the course of that century – but note it was cooling rather than warming. The cool period is dated AD210-350 which would include the re-establishment of Roman authority in Gaul and Britain. There follows a brief warm period which appears to coincide with a series of attempts to become emperor by various ambitious individuals including a couple of British based opportunists. Why this should be so is not clear but the warming appears to be negligible. It is followed by another cool period from 430 to 530 (which may reflect differences between Roman/Greek chronology and that of China as the 536-45AD extremely cold spike should be visible in the graph. One can look at the graph and say the period from AD210-630 (or a bit later) was on average cooler as a whole (but possessed dips in temperature during some decades greater than in others). Following 630 we have a stable phase in China, the Tang dynasty, but the period AD750-930 is defined as a cool period (probably once again on average as it coincides with a series of very cold decades that were central to the Viking era. After 950 and the advent of the Medieval Warm Period the Vikings morphed into an expansionary empire with a completely different focus. Instead of violent raiding the impetus was towards settlement and establishing economic trade with Scandinavia.