Terrific story reported by the Guardian (January 18th 2018) – go to www.theguardian.com/world/2018/jan/18/complex-engineering-and-metal-work… … but don't be tempted to donate (they have a begging message on the page) as these people use an offshore acccount to avoid paying taxes. See also www.tornosnews.gr/en/greek-news/culture/29502-cambridge-university-archa… … the cycladic island of Keros is throwing up some interesting  Early Bronze Age archaeology (going back to the middle of the third millennium BC). The entire surface of a natural pyramid shaped promontory on the Greek island of Keros was reshaped by human hands into terraces and these were covered in 1000 tons of imported gleaming white stone to give it the impression of a giant stepped pyramid (we are told) – rising out of the Aegean Sea. 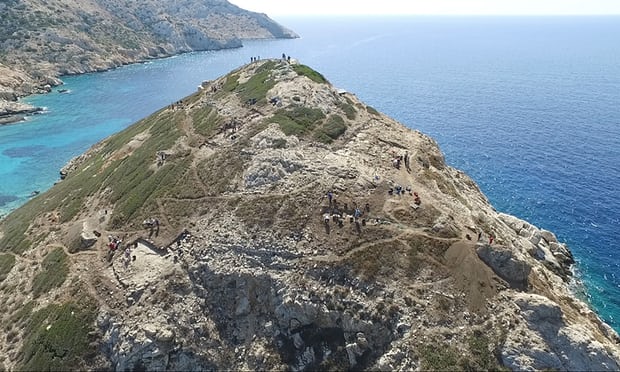 … This was constructed roughly contemporary with the pyramids in Egypt. What was the inspiration? There was probably contact between the two but we might hazard a guess that something in the sky was the inspiration – such as the Zodiacal Lights (which are pyramidal in shape). According to the Clube and Napier thesis the zodiacal lights were extremely active and prominent at this time as a result of a disintegrating large comet. They would have focussed the attention of people.

The Dhakalia promontory is now an island as a result of rising sea levels in the Mediterranean but 4500 years ago it was attached to Keros by a causeway. It is now uninhabited. In the 3rd milllenium BC Keros had a major sanctuary where rituals of some kind were re-enacted – or that is what is thought. Thousands of marble sculptures have been uncovered, deliberately broken and brought to the island for burial. Were the gods and goddesses portrayed perceived as broken – the disintegrating comet being the model. Below is an image of the staircase leading up the pyramidal hill (its bottom levels having succombed to the rising waves) … 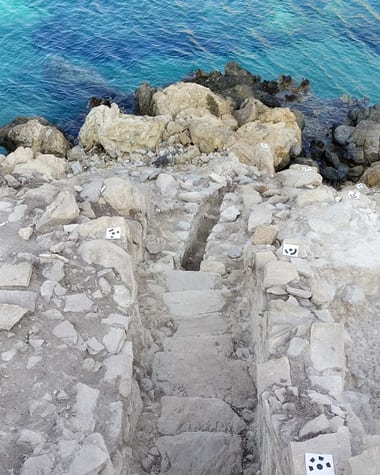 …. Colin Renfrew, formerly of Cambridge University, was one of the lead archaeologists (the excavations have been ongoing for several years). The link above announces new discoveries which includes a complex of drainage tunnels and sophisticated metal working. The white stones came from Naxos, 10 km away. The pyramid of terraces would have dominated the approach to Keros, the white stones gleaming in the Greek sunshine. A wonder of the time.