At https://phys.org/print441019716.html … Germany was covered by glaciers 450,000 years ago. In Britain the Anglian glaciation is dated at the same time and is most famously visible in sedimentary rocks in East Anglia. Arguments persist in how far south it reached – possibly as far as the chalk escarpment. Other theories suggest melting ice at the end of the Anglian also played a role – and this was part of the Anglian glaciation (terminal stage). One has to decide how quickly you might like the ice to melt. However, this paper (in the press release) has glaciation reaching as far south as the Leipzig region – in central Germany. There are well documented sedimentary rocks in this area as a result of gravel extraction, and open cast mining of brown coal (and the odd drilling exercise). River deposits are preseved between moraines of ice advances. In dating these systematically they have determined the first cover of ice occurred in isotope 12 (450,000 years ago). It is called the Elsterian glaciation in Germany – after the name of a river. The river deposits are basically gravel distributions also contain Lower and Middle Palaeolithic stone tools, many of which have a rudimentary look. The same applies to gravel beds in Britain – and the latter would have been joined to the continent (including north west Germany). There is a picture of a Scandinavian erratic boulder found during gravel extraction – though to have arrived via the head of a glacier but could equally have been driven south by glacial melt waters. 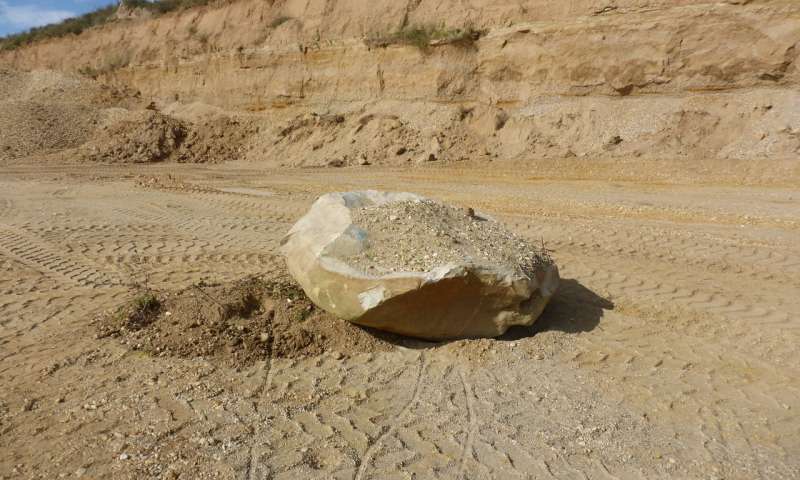 … The younger sediments explored belong to the Saalian glacial (also named after a river), an ice advance around 150,000 years ago. The study is published in Science Reports (March 2018)