The lure of gold in the 19th century (gold fever) seems to have affected the Russians as much as any other Europeans – and they had the vast wilderness of Siberia in which to explore. In 1894 gold seekers dug out part of a peat bog near Yekaternburg and unearthed a beautifully preserved wooden idol, five metres in length (yes, 5 metres). The wood was first transformed into a flat plank and then was covered back to front with human faces and hands, zigzag lines, and various other symbols. It also had a human head at the top – with its mouth open. See www.sciencemag.org/news/2018/04/11000-year-old-statue-unearthed-in siberia-may-reveal-ancient-views-of-taboos-and-demons ….. (if link does not work try www.sciencemag.org/content/360/6387/362 … and the same story is at https://phys.org/print444036772.html …. 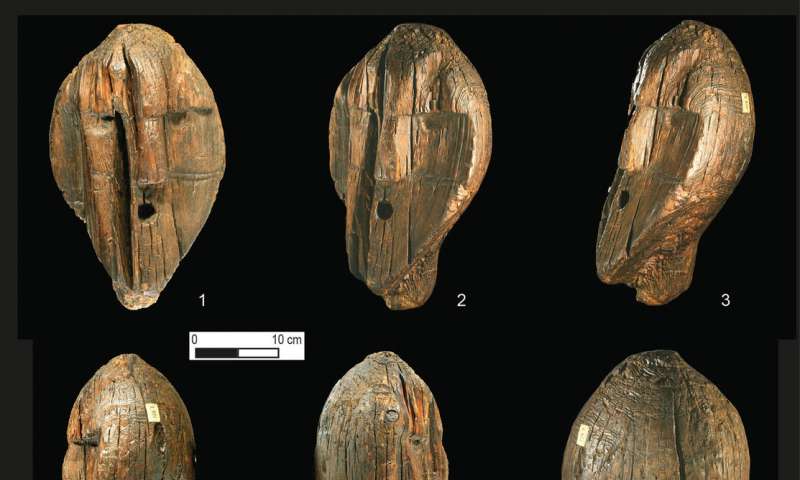 … It was assumed to be a few thousand years old at the most and was subsequently put on display in the local museum, as a curiosity. A paper in Antiquity (April 2018) argues the artifact was crafted from a single larch wood log (or trunk) some 11.600 years ago (bang in the middle of the Younger Dryas event). It is therefore one of the oldest pieces of human monumental art. Even more remarkable is the fact the artifact, known as the Shigir Idol, resembles the stone sculptures at Gobekli Tepe in SE Anatolia (overlooking the Syrian plain) of roughly the same period in time (or a little later). They are often said to be the earliest monumental structures in the world – yet we have a wooden example from Siberia dated a little earlier. Clearly, wooden artifacts rarely survive for long – and the Shigir Idol only survived as it was in a peat bog. How much more monumental art was produced but has since been lost? It seems the people of the early Holocene period had something on their mind – and that something may have had a connection with the Younger Dryas event.

The first C14 date of the idol came up with 9800 years ago – which was rejected by many experts as implausibly too old. They argued that hunter gatherers could not have fashioned such a large sculpture – 5 metres in length (nor have the complex symbolic imagination to decorate it). Note … it is assumed by them that symbols are purely abstract and do not represent phenomena witnessed by the artists and his tribe. This is of course inverted snobbery and plain simple prejudice. Were farmers and merchants inherently more artistic than hunter gatherers? Why should that be so? Is it logical to think hunter gatherers were dumb – especially when we know they were making and using pottery vessels in eastern Asia even earlier than this idol (and were also hunter gatherer in classification).

The new dates come from the core of the log (or larch tree) and as such are uncontaminated by earlier efforts to preserve the wooden artifact. The core sample provides the oldest date and it is suggested that after its discovery (lifted out of the bog) it began to deteriorate and the museum was forced to artificially preserve it by using a glue of some kind, a coating on the wood. Hence, this caused the earlier C14 dates to be too young. However, in support of the more recent C14 date, 11,600 years ago, a carved antler found nearby came up with a similar date. Of course, an interpretation of the symbols and the zig zag lines is purely mainstream in nature – and somewhat wishy washy. Zig zag lines are a common feature of artifacts right through the early to mid Holocene period (and are still popular nowadays). The meaning of such lines is unknown – and lost over the course of time. Bandying about the word 'ritual' is generally unhelpful.

Note … one may also note the Shigir Idol has a later parallel in NW Pacific totem poles – or even the maypoles of Europeans. What is even more interesting is that these new findings have prompted Russian archaeologists to go back to the original site (and nearby bogs) to excavate further. Stone adzes and wood working tools have been unearthed so far.