At https://phys.org/print453630339.html … Aboriginal tradition describes the complex motion of the planets, the wandering stars of the sky. This may sould a bit like Robert Temple and his 'Sirius Mystery' but no – this is serious science (projected out of Aboriginal myth). The Greeks called the planets 'anteres planetai' (wandering stars) as they wander across the sky relative to the fixed stars. Now we have some new research that says Aboriginals had a much earlier tradition of the moving planets. They base this on ancestor spirits who walk across a celestial road – the Dreaming Track in the Sky. Astronomers think they are talking about the zodiac (which they are of course) the region of the sky 9 degrees on either side of the ecliptic (the path of the Sun). As the planets orbit the Sun is 'roughly' the same plane, they are all visible along this band of the sky. Astronomers Clube and Napier viewed this track in the sky somewhat differently. The highway of the sky was likened to a heavenly river in the sky – which explains some Egyptian myths as well as salmon swimming upstream in Celtic mythology. They visualised this a great stream of debris left behind by a disintegrating giant comet, with some big bits visible as the light from the Sun illuminated it on its journey towards the pyramidal zodiacal lights (much more pronouced in the 3rd millennium BC than present). In other words, not necessarily the whole of the zodiac. One can therefore view the Dreaming Track in the Sky as the zodiacal passage of the planets – or a real trackway in the sky (aka Clube and Napier). In the mainstream vision the wandering stars are just moving planets. In the Clube and Napier version of the same story line the debris streams that make up the Taurid meteor complex are to blame for a series of 'events' that punctuate the past. One is uniformitarian in concept and the other is catastrophic in nature. Read the article and see what you think. Are the Aborigines really talking about the planets? 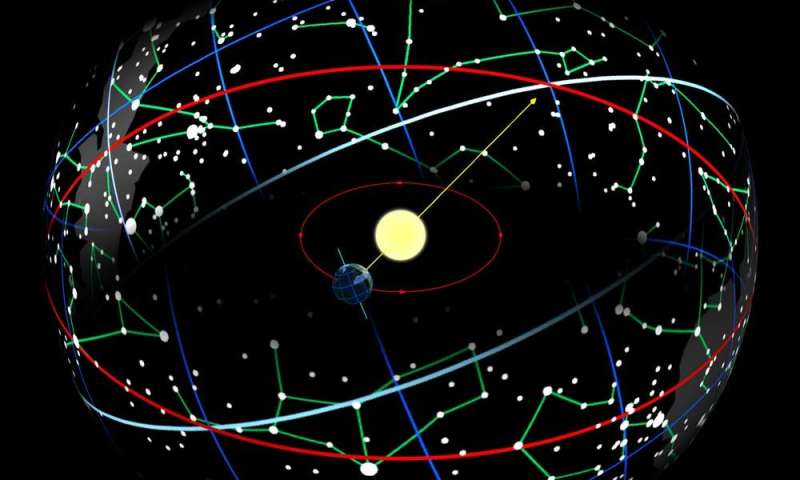 … the red line represents the ecliptic.