The flyby by New Horizons, zooming past Ultima Thule, has got a lot of people excited, and on the same day we have the Chinese landing a spacecraft on the dark side of the Moon. At https://phys.org/print465644260.html … we are told Ultima Thule looks like a brick red snowman. The first pictures are filtering back to Earth from New Horizons and NASA scientists are keen to get across mainstream theory – too impatient to wait for further images. The smaller part of the object is 9 miles wide (the snowman's head) and the bigger part is 12 miles across (the snowman's body). Apparently, the consensus view emerging is that the two pieces are joined at the hip because of accretion – the mainstream theory on how the planets formed. They ignore the fact that comets and asteroids also come with a neck, head and torso formation as a result of outgassing.

At http://spaceweather.com (see the posts at January 1st and January 3rd (2019) where the same story is offered …. 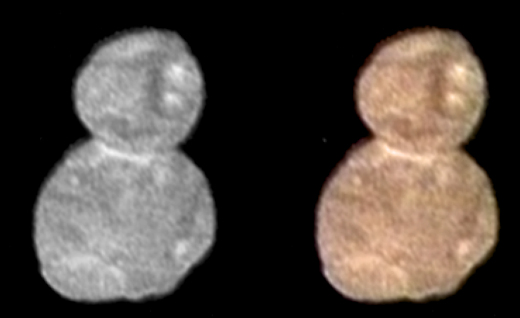 …but not the full press release. Instead, they say, mission scientists believe it was formed by accretion … and ignore the embellishment.

Meanwhile, over at https://cosmictusk.com/another-crater-hiawatha-greenland …. which came about via Steve Garcia claiming he had eyeballed another crater just to the south of Hiawatha crater. Yet to be confirmed but apparently the discoverers of Hiawatha are on track of other possibilities beneath the Greenland ice sheet.