At https://phys.org/print467538949.html … around 56 million years ago (give or take the odd day) global temperatures spiked. In the UK this coincided with a massive eruption on what is now the Isle of Skye – the Cuillins. See Scientific Reports (January of 2019). Geologically, this is close to the boundary between the Paleocene and the Eocene. Volcanic activity was also endemic on Greenland and elsewhere in the British Isles and the general North Sea region. 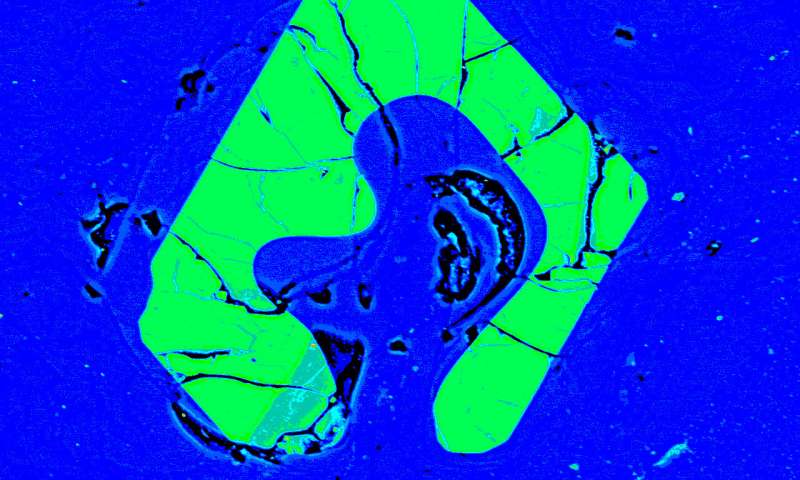 … a false colour image of an electron microscope of resorbed apatite crystal (green) in pitchstone glass (blue). This is identical to pitchstone sites at Sgurr Eigg and Oigh sgeir, 30 miles apart but displaying a common origin. A bit complicated but apparently conclusive.

In Down to Earth magazine (January 2019) scientists from Cambridge University working at a site near Hastings in Sussex (on the south coast) have dsicovered a trove of dinosaur footprints (at least 50 individual prints representing seven species) in what are described as Lower Cretaceous rocks (presumably beneath the chalk). This arose as a result of coastal erosion along the cliffs looking out over the Channel. The footprints are so well preserved that fined detail such as skin, scales and claws are easily picked out. The discovery was reported in the journal Palaeogeography, Palaeoclimatology and Palaeoecology. Fossilised footprints of dinosaurs have, over the years. cropped up in Sussex geology – and the Hastings examples are not that unusual. In fact, Hastings is also famous for its dinosaur fossils – also in Lower Cretaceous contexts. Whole fossils of dinosaurs are rare. Normally, the fossils come in small pieces, buried close together. The cliffs also revealed fossilised plants and invertebrate and it is more than likely that much more evidence of dinosaurs lie within the sandstone layers in the cliffs.

Meanwhile, Down to Earth also tells us that lithium (as used in batteries of the same name) is going to be mined in Cornwall – to be extracted from hot water brines below the surface that have welled up into old tin and copper mines. They will also explore for lithium in hard rock situations (lithium enriched granites). Meanwhile, there are plans to produce high quality coal (anthracite) from beneath the Irish Sea by a mining company. Government approval is required. However, this is an area of high unemployment – but one with a rich mining heritage (iron, coal, anhydrate etc).