Another story about the history and origin of apples – www.eurekalert.org/pub_releases/2019-05/mpif-eto052119.php … for example, last year we had some research that showed cultivated apples were disseminated into western Asia and Europe, from what is now Kazakhstan, along the Silk Road (and it made a lot of sense). 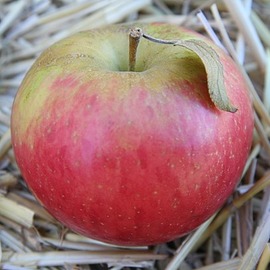 In the new research this is retained but a fuller overview of the origin of apples is sought. After all, the seeds of apples have turned up in Eurasian archaeological contexts over the last 10,000 years – long before the Silk Road became an important human highway for the dispersal of goods and ideas. It seems that originally apples were spread by animals rather than by humans and it is only in the last few thousand years that humans have played a major role in their dispersal around the globe. Several recent genetic studies have shown the modern apple is a hybrid of at least four wild apple populations. Researchers hypothesize that the Silk Road also played a role but at some point the various wild apple strains were hybridised – and humans are most likely responsible. Archaeological remains of apple seeds have been found in many locations suggesting fruit and nut trees moved along trade routes. It is argued that large fruits evolved to attract megafauna – large animals (in order to eat them and spread their seeds in their travels). Fruits are an evolutionary adaptation for seed dispersal – but what animals were eating what fruit. For example, if you have a cherry tree in your garden or yard it will attract birds. Many fruit trees in the apple family have small fruits (think about cherries, raspberries, and roses). The seeds are dispersed mainly by birds. However, when it comes to apples, pears, quince and peaches we have fruits too large for birds to consume (although they can peck at them). Bears and horses eat apples. When I was staying in a bed and breakfast place on a journey across Canada, one night the apple tree in the garden became the subject of a raid by a black bear. It made a mess of the apple tree itself but shook down a lot of the fruit in what might be designated as a spot of 'natural' pruning (missing tree limbs and broken branches and a multitude of twigs and leaves strewn on the ground). No doubt the apple tree survived just as they do when subject to a severe pruning by a gardener – and probably fruited even better in the following years.

The argument then expands to say that in the Pleistocene Ice Age environment there were many more very large animals across the Eurasian landscape, capable of dispersing the seeds. Herds of wild horses for example, and large deer. Dispersal during the Holocene was probably weaker than in the Pleistocene as there were less large animals to spread the seeds around. This is where the Silk Road comes in (a bit a human intervention in the disperal process, and hybridisation). Wild apple populations that survived in glacial refugial zones of the Ice Age suggests they became isolated during the Late Pleistocene Maximum – until humans intervened in the process of dispersal. Excellent study – and no doubt a few loose strands still to be tidied up.