At https://journals.plos.org/plosone/article?id=10.1371/journal.pone.0222560 … or https://doi.org/10.1371/journal.pone.0222560.g001 … as well as https://phys.org/news/2019-12-ancient-mediterranean-seawall-defense-sea…. … a submerged 7000 year old village and sea wall are said to represent the earliest known coastal defence barrier against sea level rise – the obligatory nod to climate change in order to be published without any hassle. Neolithic settlements are found along the whole of the eastern Mediterranean coast and this one was found close to the nose of Carmel (dating 7500-7000 years ago, it is estimated). This is not too long after the 6200BC event which witnessed massive sea level changes in various parts of the world – including within the Mediterranean basin. Again, it was assumed to represent a sea wall (and that might very well be true) but on the other hand it may have been a wall to keep marauders from the sea from attacking them. See also www.naturalearthdata.com .. and sea levels (in the past and in expectations).

Older settlement sites are found deeper and further out from the shore. This spread of sites is said to represent a correlation between sea level rise (incremental)  and the abandonment of coastal communities (as points on a graph). The deepest ones so far appear to date to the 9th and 8th millenniums BC (coinciding with the separation of Ireland from Britain in the far west of Europe). Was it a global phenomena and if so where did all the water come from as the Ice Age ended between 18,000 and 15,000 years ago. 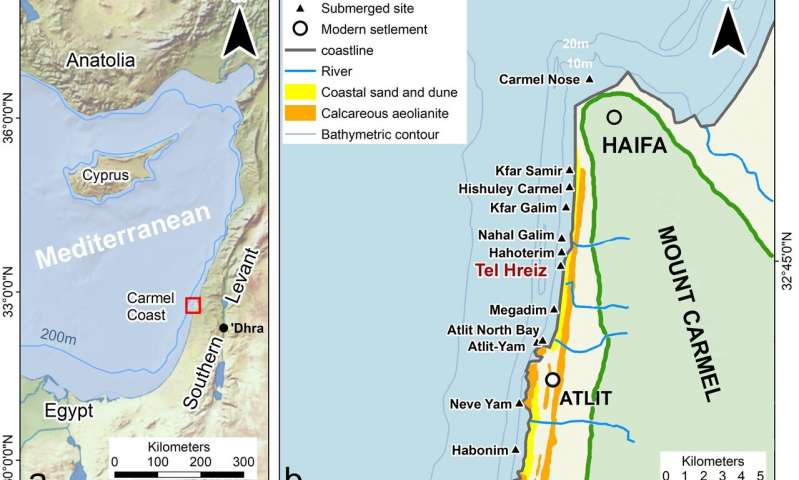 A rather irreverant seam of comments follows the same story at https://wattsupwiththat.com/2019/12//20/study-villagers-built-a-monster-… … very useful as they demonstrate sea levels have risen in the past without the use of fossil fuels and sometimes in a quite alarming way. Some of the rises appear to have been fairly abrupt. If not melting glaciers what else? Changes in the geoid of the earth perhaps. Redistribution of the oceans. One idea that has never been properly investigated.