At www.physorg.com/print190485260.html … research has found natural particle accelerators can be formed by lightning storms. When intense lightning discharges in thunderstorms coincide with high energy particles (cosmic rays) coming in from space nature forms a giant particle accelerator above the clouds – stripping electrons from air molecules. He is referring to lightning discharges above thunderstorms – known as sprites (see below). 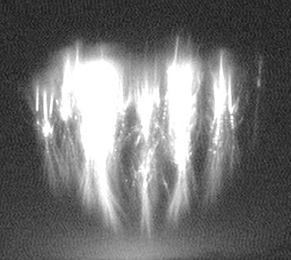 At www.physorg.com/print190476830.html … very faint and distant galaxies seem to have a faint radio source, it is suspected. Astronomers have been wondering why the cosmic background radiation is much brighter at radio wavelengths than expected and suspect fast spinning black holes, involved in the galaxy formation process.

At www.physorg.com/print190476155.html … polar skies glowed with aurorae last week during a geomagnetic storm – caused by a solar eruptions a few days earlier.

At www.physorg.com/print190474861.html … dust, it is claimed, played a role in the formation of water on earth. It is thought comets delivered water to earth in the early stages of earth history – and you will hear this repeated as if it is an established fact (on BBC Radio 4 ‘Save the Planet’ for example). Comets are thought to be formed from interstellar material left over after the birth of the sun. An add-on tko this theory is that dust grains which make up 1 per cent of the interstellar medium are able to build up ice on their surface in deep space – but further research is necessary (Royal Astronomical Society).

At www.physorg.com/print190467813.html … two recent studies have put Einstein’s ‘General Theory of Relativity’ to the test – and it has risen to the challenge. NASAs Chandra X-ray Observatory shows that Einstein’s theory works over a vast range of time and distance. In recent years physicists have dabbled with competing theories as possible explanations for anomalies such as the perceived accelerated expansion of the universe, or the idea of energy that exists in empty space – dark energy (by reason it can’t be directly detected).