This amazing story can be found at http://scienceblogs.com/channel/life-science/ and scroll down list of articles to January 19th where it is the fourth post of that day. It was written for National Geographic by Darren Naish, a science writer and paleozoologist at the University of Portsmouth. In 1994 Baruch Rosen pubished a brief article in Nature which sparked a bit of a debate on Egyptian art and conventions in motif and portrayal. Rosen drew attention to the small hairy elephant with long tusks in a tomb painting, shown as waist high as it is standing next to some Asian traders that carry objects which include ivory tusks. African elephants, and a small population of Asian elephants in Neya, somewhere in Syria, were well known to the Egyptians of the New Kingdom – but the one in the painting is possibly something quite different. 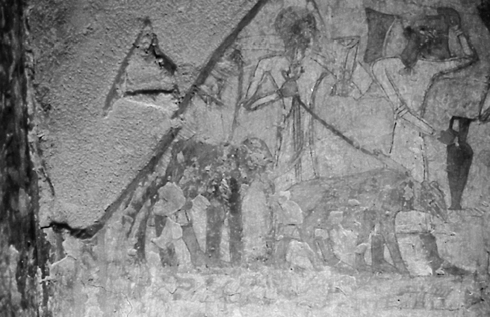 It is hairy for example (sorry about the image quality but a magnifying glass will reveal the detail a little better) and has huge tusks for an animal so small. It is probably a juvenile Asian elephant so why did the artist portray it with such prominent tusks?

The painting is in the tomb of Rekhmire, governor of Thebes who rose to be vizier in the reigns of Thutmose III and Amenhotep II. Rosen made the original suggestion that it was a dwarf form of woolly mammoth but there is also the possibility it is one of the pygmy Mediterranean island dwelling species of elephant, Naish continues. Most of these were Pleistocene era and no longer alive in the time of the pharoahs – except perhaps, Naish says, on the Aegean island of Tilos, where C14 has provided a date of 2300BC for a specimen.

A few days earlier (scoll down list of articles at same web site to January 14th and the third posting of that day) Naish had a piece on Pleistocene animals found on islands such as Malta. These were dwarf species in some instances and therefore animals left stranded on the islands as the connection to the mainland was submerged. Some islands in the Mediterranean had populations of pygmy elephants, hippopotamus, deer, and some other species in a 'gigantium' form such as giant dormice as well as very large birds, tortoise and lizards (see also www.paleocreations.com/index.php ). There are also links to extinct Caribbean animals and island dwelling crocodilia of the South Pacific. All in all a quite fascinating aspect of the natural world – of the past.