A wonderful post to catch the eye at http://frontiers-of-anthropology.blogspot.co.uk/2012/12/owl-plaques-eye-… … here we have some repeating motifs that look suspiciously like plasma pinch phenomena as illustrated by Perratt. I'm sure David Talbot has lots of images like this but here they are associated with the Chalcolithic culture of Iberia – and this began prior to 3000BC. 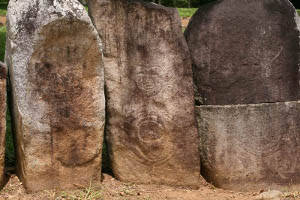 There are a number of interesting images on the site, such as Valdavian pottery from Ecuador in South America and the famous Eye Temple at Tell Brak in the Habur valley of the mid-Euphrates region, Jomon figures in Japan, plaques from Mexico, and so on – see Journal of Archaeological Science 2012. The article authors have not of course heard of Perratt and his rock art studies but they do illustrate that the schematic figure with stylised eyes is a common motif. Marija Gimbutas, it seems, associated such goggle eyes with the Mother Goddess figure, a somewhat tarnished concept nowaday but a hypothesis that brought together an extraordinary amount of folklore and customs. The staring eyes motif reappears in megalithic tombs in Brittany, Portugal and Spain, again from the 4th millennium BC (and again somewhat earlier than the 3000BC event that has been linked provisionally with a z-pinch event). Worth looking at these dates again.