Thornborough Henges, three henge monuments built in a sort of line, and constructed all in one block, are closely associated with a belt of gypsum. This particular geological deposit has been exploited over a long period of time, from the Mesolithic through the Neolithic and into much later times. The interesting bit from our point of view is that gypsum appears to have been used to whiten the monuments in the complex  (henges, barrows and cursus etc). The whitening, of itself, suggests a connection with the sky – and white light (comets, stars, even the Moon). In southern Britain subsurface chalk was used to face monuments and in other parts of the country white quartzite, had a similar function. White was the colour of the sky gods – but intriguingly, the yellow Sun was the focus of the main alignmnet of the monument, midwinter Sun. However, Jan Harding has expressed the opinion the three henges might represent the three stars of the Belt of Orion. No, he has not swallowed Robert Bauval's The Orion Mystery, as he has an explanation which is much less dramatic, although he could, I suppose, have looked at the role of giants in The Matter of Britain, or the legends thereof. No, this is serious stuff by a serious archaeologist, it would seem, and the connection is somewhat mundane – but quite striking. In Yorkshire, Orion appears in the northern night sky in mid August (ushering in harvest). It disappears again in mid March, its vanishing heralding the immanent arrival of spring.

Jan Harding says, it seems that all the major monuments at Thornborough are sited in ways to suggest a carefully planned landscape layout – or even, for want of a better term, sacred geometry. The latter can perhaps be described as geometry with an origin in connecting up the points of things going on in the sky. I don't think he intended a link to the tree hugging gaia people – but perhaps he indulged a bit when he was younger, puffing on the odd roll-up. This might be indicated where he says, 'this was a landscape where the air was thick with religion … spiritual energy and sacredness' (but I suppose it depends on what you mean by religion). For a more balanced report on his book you need to read Current Archaeology 289 (April 2014) or go to www.archaeology.co.uk when in a few weeks time the content of the current issue will be uploaded, not fully of course. 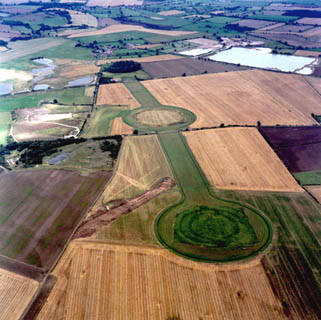