We all know what the Romans did for us – they created the border between Scotland and England. What did gravity do for us? It saved the universe according to a new scientific paper – see http://phys.org/print335524004.html It's all about Big Bang dynamics, the Higgs Bosun particles – and the expansion of the universe.

Meanwhile, at http://phys.org/print335428655.html … another paper in Nature Geoscience is now saying that water flow on Mars was episodic. Warmer temperatures on Mar as a result of periods of volcanism generated rivers to flow and lakes to form. When temperatures declined the water stopped. The key here is volcanism – and the fact this is derived from a computer simulation adds to the stew. On Earth, volcanism causes the temperature to cool – even drop to very alarming levels on the eruption of a big volcano. A few days ago there was another paper that even went so far as to claim the recent spits and spats of volcanism are responsible for the global warming hiatus – causing temperatures to stop going up (standing still). Hence, double speak in climate science is so wonderful that now we have volcanism on Mars creating luxuriant conditions – but computer modelling can show such wonderful things. 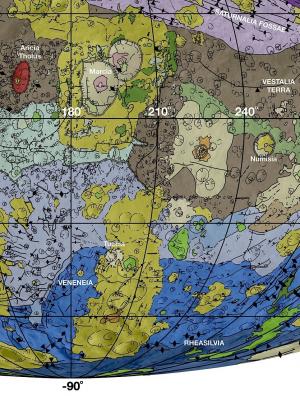 … brown colours represent the oldest and most heavily cratered parts of the surface. Purple and light blue terrain that has been modified. Greens and yellows represent young, landslide events (or downhill movement of sediments) and black lines denote faults (fault lines). The craters are assumed to have been formed by impacts – in fact the interpretation supposes an awful lot of impacts. One may wonder how an asteroid remained intact under a constant bombardment by space rocks. However, if Vesta is a former comet, or remnant, the craters could have been formed by outgassing.