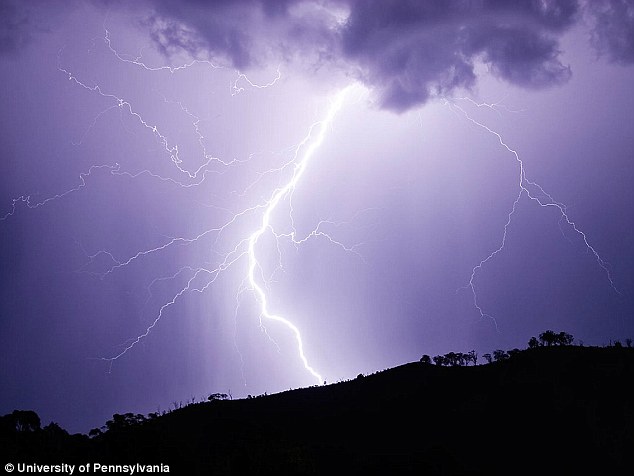 At http://phys.org/print358014293.html … an article in the journal American Mineralogist illustrates how powerful lightning bolts can affect rocks, melting the surface resulting in a black gloss and actually deforming a thin layer of of quartz crystals beneath the surface, creating what is known as shock lamellae. Prior to this discovery such rocks wee attributed solely to meteoric impacts. We may therefore wonder if meteors more commonly exploded in the atmosphere and the shock wave, like lightning, caused shocked quartz rocks.

The same story is at www.dailymail.co.uk/sciencetech/article-3186858/Lightning-powerfuo-charg… … lightning bolts alter the structure of rocks and can melt the surface of rocks – with an intense pressur wave that penetrates deeper, forming shock lamellae (shocked quartz) which previously was only attributed to nuclear blast and meteor impact cratering. Cosmic rays can also trigger lightning we are told, and lightning has the ability to vapourise the surface of rocks etc.

Lightning strikes in sand cause the grains to fuse together – fulgarite.

In The Times, last week, there was a short piece on strange lights in the vicinity of Barmouth in Wales, going back over a 100 years ago. It began with a huge arc that looked like an aurora, stretching from the nearby mountains into the Irish sea. Following that, over a period of several months, there were dozens of reports of lights emerging out of the ground, sometimes hovering in the air or floating away – or just bursting in a puff. A religious revival coincided with the strange lights, involving Mary Jones who witnessed a ball of light hovering above a small chapel not far from Barmouth.

It turned out strange light phenomena had been seen at Barmouth in the past, back in 1693. It is thought a geological fault might be to blame, creating ball lightning or some other kind of electro-magnetic energy during friction events below the surface. Electrical discharges are known to take place during some tectonic activity.