At www.abdn.ac.uk/news/8083/ … the Rhynie Man carries an axe of a type associated elsewhere with animal sacrifices. He also wears a hat or headdress and has a long poined nose, big teeth, and a pointie beard. He was found in 1978 in Aberdeenshire, a six foot high Pictish stone (and carving) – see here 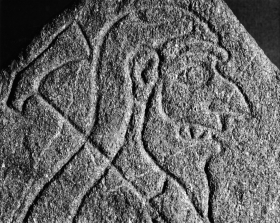 The figure has been a mystery since it was found, apart from the fact he appears to date from the 5th or 6th centuries AD. In 2011 and 2012 Mediterranean pottery was found nearby as well as glass from France and metal work with Anglo Saxon origins. Metal work was being in situ at the Pictish site but it has all left of lot of questions unanswered. Excavations are still in progress and it seems the Rhynie stone stood near an entrance to the Pictish fort (or settlement).