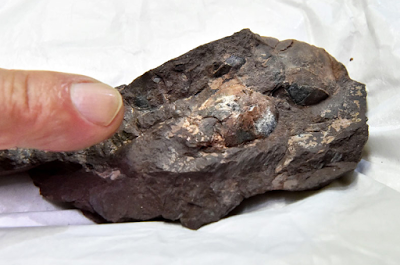 dinosaur eggs found in Japan, just 5cm long and 2cm wide, really quite small for a big dinosaur beast to crack open. It is not known what species laid the eggs but they are thought to be from a small species – or a bird. They were fossilised inside their nest.

Over at https://malagabay.wordpress.com/2016/01/14/stranded-seals/ … Tim Cullen is in fine mettle and beating his breast about seals – how did they survive the Ice Age. I've never thought of this one but he presents a case for the ice being so thicik they could not possibly have survived and therefore the Ice Age just gone could not have been as bad as it is painted. The mainstream view of course is that the ice sheet was unusually thick – very thick in fact. Thick sea ice is also supposed to have swamped the Arctic Ocean and the North Atlantic, completely surrounding Iceland. Cullen's arguments is that the mainstream view is untenable with the survival of various seal species – including some that are found in land locked lakes. For example seals were living in the Baltic Sea when it was supposedly a landlocked inland basin with no access to the Atlantic – and the ice sheet shortly having retreated. Yet seals flourished there.

The Arctic Ocean is another example, supposedly full of sea ice so thick no seal could possibly survive there – and yet they thrived. The last ice age, he says, posed deep challenges to seals – yet they seem to have been quite plentiful. At the Wiki we learn that the Arctic Ocean, according to deep sea cores, must have been open water on occasions – if not often occasions. This is not part of the Ice Age presentation in mainstream is it?

Cullen's point is that the Ice Age was really not a lot different to what it is today – in order for seals to have flourished and to account for the sediment cores. So how did they estimate the thickness of the ice sheet? Thinking about that it is possible the thickness is derived from the amount of sea level rise that was seen to take place in the North Atlantic after the end of the Ice Age. That might not be true but it would have been one way for them to be so sure of the thickness of the ice sheet over north east N America. There is another option not discussed by Tim Cullen and that is Pole Shift (alternatively a change in the axis of rotation). Peter Warlow's presentation at the last Cambridge Conference gave us the possibility that the Late Glacial Maximum was in effect a shift in the position of the North Pole and the ice sheet expansion reflects this. In other words large parts of the Arctic Ocean would have been ice free and seals could have frolicked to their hearts content. In the Atlantic they simply had to move south and at some stage ended up in the Baltic which must have been at the edge of the ice sheet. Obviously they would not have been in the North Sea as that was above sea level. If Pole Shift was a reality it would explain the switch in sea levels as the equatorial bulge would have moved and the flattened area at the Poles (or relatively speaking). In that situation the thickness of the ice need not have been as great as imagined, and no more than tody – but redistributed from its current location. Seals would have been quite capable of surviving in such a scenario – but mainstream won't be taking any notice of Tim Cullen or Peter Warlow.