An article in Current Biology 26 page 1-7 by Posth et al is interesting – see also http://phys.org/print373788881.html … which provides a link via dx.doi.org/10.1016/j.cub.2016.01.1037 'Pleistocene mitochondrial genomes suggest a single major dispersal of non-Africans and a Late Glacial population tunrover in Europe.' Quite how, or what impelled modern humans to disperse into Eurasia and Australasia is an unknown but genetics may be able to pick up such movements, and these appear to be multiple rather than a single movement flux. Hence, we are looking at a number of expansion, or migration events to be more precise.

Various models have been made to get an idea of movements in Asia and Australasia but European movements are not so well known. There is just a few subsets of data we are told, mainly from around the 40,000 years ago m ark which is when modern Europeans are said to have first migrated into Europe. This new study has analysed 55 complete human mitochondrial genomes of hunter gatherers spanning around 30,000 years. 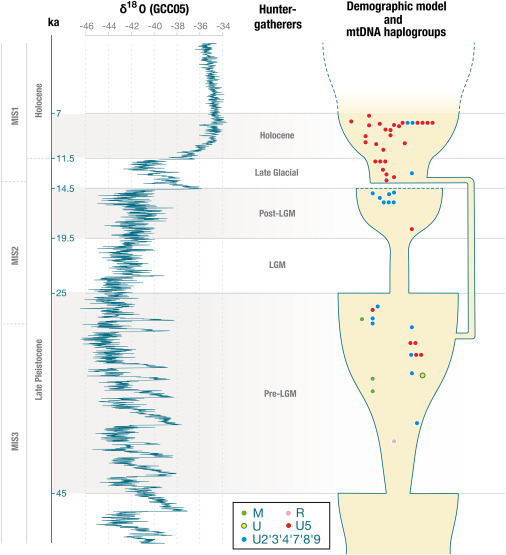 The image above has three bottleneck restrictions associated with what they say are episodes of climate change – but can more properly be defined as catastrophic events of unknown providence. These are withn the 40 to 30,000 years ago envelope, and at the end of the Oldest Dryas Event around 14.5k years ago, and again at the onset of the Younger Dryas Event around 11.5k years ago. However, the narrow neck clearly coincides with the Late Glacial Maximum when ice advanced south into Britain and the northern European Plain. Bottle necks are modelled as humans retreating to Refugea locations and in turn leaving such Refugea locations when conditions become better (the shrinking of the ice sheets). Iberia and SW France are one such Refugea location. The assumption here is that humans had enough time and warning of ice advance to move south into Refugea locations whereas in a catastrophic scenario this may not have been possible as the changes may have been quite rapid – a sudden onset of very cold weather. Obviously, if you think orbital changes were responsible for the LGM and then you would naturally assume it was a prolonged event – so what does the genomic evidence say. What this study is saying is that human population groups from the LGM and shortly before virtually disappear in the post Ice Age warm interval between the Oldest and Younger Dryas events, and instead an entirely new group of hunter gatherers takes their place.

Another interesting finding was that the first modern humans to enter Europe were closely associated with northern Euroasian groups and people from East Asia and the Americas. Their genes do not occur within modern Europeans we are told – although this may be overturned in future studies with a wider data base. 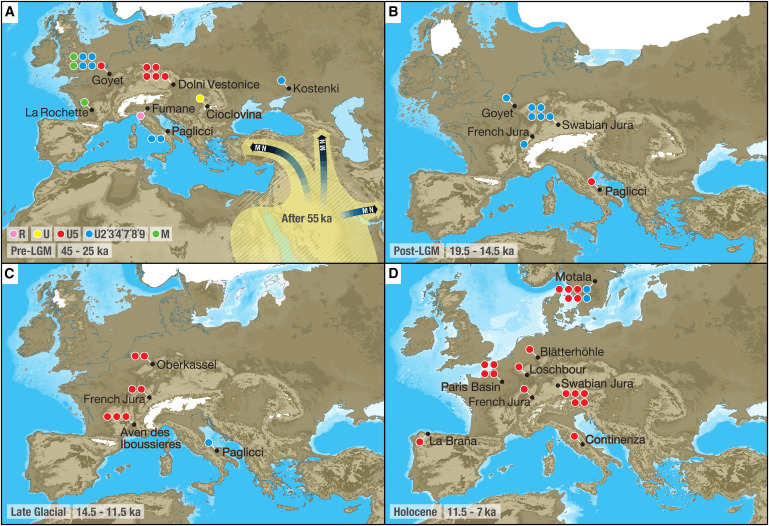