This is an interesting encounter between a comet and a planet and it could be used to conjecture on what might have occurred on Earth if a comet came close enough. At http://astronomynow.com/2016/03/10/close-flyby-threw-mars-magnetic-field… … as a result of a close encounter with Comet Siding Spring. It flooded the planet with an invisible tide of charged particles from the coma of the comet. The dense inner coma is said to have washed the surface of the planet – or nearly so. The magnetic field of the comet temporarily merged with and threatened to overwhelm the planet's magnetic field – thought to be a fairly weak affair. See image below 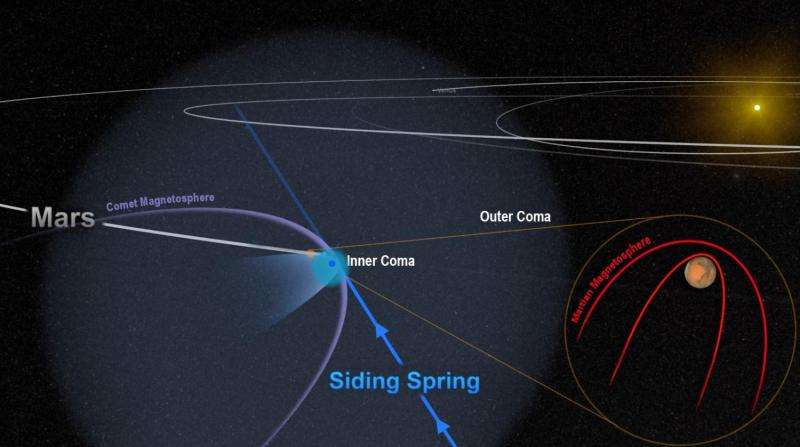 The link was sent in by Robert Farrar – but see also the NASA web site and the MAVEN mission.

NASAs MAVEN spacecraft was in orbit around Mars and for safety reasons some instruments had been turned off in case they were damaged in the flyby. The same was done with the Mars Orbiter spacecraft. Other instruments, such as magnetometers, remained in working phase – and had a grandstand take of the event.

What occurred gave scientists a view of the havoc that a comet's passing could wreak upon the magnetosphere surrounding Mars. The effect was temporary – but profound. Comet Siding Spring plunged the magnetic field around Mars into chaos, said Jared Espley of NASAs Goddard Space Flight Centre in Maryland, the encounter blew away part of Mars upper atmosphere – much like a strong burst of solar wind might do.

Unlike Earth the planet Mars is not protected by a strong magnetosphere but it still offers some resistance, a protective sheaf that is capable of deflecting the solar wind. Mars atmosphere, at high altitudes, is made up of plasma – electrically charged particles and gas molecules. Charged particles in the solar wind interact with the plasma and this produces electric currents – moving charges that induce a magnetic field. Comet Siding Spring is also surrounded by a magnetic field as a result of the solar wind interacting with plasma in the coma – an envelope of gas flowing from the comet's nucleus. The nucleus of Siding Spring is just half a kilometre wide but the coma, in contrast, stretches for a million kilometres (600,000 miles) – in every direction. The densest part of the coma (about the nucleus) is the part of a comet that is visible in telescopes and cameras (or in binoculars) as a big fuzzy ball of light. It is not the actual nucleus that you can see. When Siding Spring passed Mars the two bodies were as close as 140,000 kilometres (87,000 miles) of each other – which puts it into perspective. Asteroids pass Earth much closer than that so it is not unreasonable to think a comet may have done so in fairly recent times (which is the basic core of Velikovsky's 'World's in Collision'). In addition, Siding Spring is a small comet – what might have happened if a bigger comet, such as Halley thousands of years ago, came close to the Earth?

The coma washed over Mars for several hours with the dense inner coma nearly touching the surface – but not quite. Mars was flooded by charged particles from the coma. At first the changes were subtle with some regions of Mars magnetosphere realigning themselves. It grew in intensity – making the magnetic field flap like a curtain on a windy day (with the window open). Hours after the comet had passed disruption continued.

Basically, the effect of the coma was like an extremely strong dose of solar wind (from a big CME event). The MAVEN mission is producing data so that NASA scientists will be able to understand how the Sun and the solar wind interact with Mars – and therefore with the Earth..

Note … the encounter reads like a paragraph out of Electric Universe speculation and one may wonder what would happen if the coma of a comet came close to the Earth and what phenomena it might generate. This would surely be preserved in mythology – see for example McCafferty and Bailie, 'The Celtic Gods; comets in Irish mythology' Tempus:2005. For example, on page 49, they try to make sense of the god Lugh (usually described as a sun god, or a sun-like god) 'coming up from the west' (or on the wrong side of the Earth as the Sun rises in the east). Velikovsky used this to suggest the Earth has flipped over on occasion but McCafferty and Baillie come up with a different interpretation – a fast moving object, such as a comet, moving more rapidly than the Earth. It could not be the Sun as that always rises in the east – so it must have been some other space body. A closely approaching comet (relatively speaking) would fit the bill and they conducted an experiment, of sorts, which they describe, that anyone is capable of reproducing to see what they had in mind.

Contrary to the comments on one of the recent WattsUpWithThat posts, mythology should not be excluded from scientific endeavour – as it provides a clue. All we need to see is the myth in play in the modern world – and various myths appear to describe close encounters with comets (or their constituent parts). Prior to the encounter with Siding Spring it may have been appropriate not to take the myth of Balor, or of Lugh, or indeed of any other pagan god as a description of past events, from a strictly sceptical angle (although often arrogance masquerades as scepticism as a result of puffed up egos and the idea of elite knowledge). Now we have seen what Siding Spring did there is no excuse for ignoring the mythic parallels. A similar paradigm shift happened in the 1990s when Comet Shoemaker-Levy 9 collided with Jupiter – it altered perceptions of the nature of comets. Suddenly they were perceived as a destructive force – whereas previously they had been rather cuddly affairs, fluffy snow balls (a concept some scientists still find hard to dislodge from their minds). The idea comets were concretions of nothing much is what inspired Velikovsky to think a planet sized body must have been responsible for mythic allusions to a cosmic object coming close to the Earth (he never ever said an impact occurred in spite of the urban myth to the contrary). In retrospect this was a serious error – but he wanted something substantial in order to create his perceived catastrophic event (and comets at the time were considered harmless). Science changed its mind – and this makes Velikovsky's treatment of Venus appear to be more whacky than what it was (but judged from the perspective of the 1940s to 1960s knowledge one can see why he opted for a planet rather than a run of the mill comet, an idea that had been broached by many people earlier than his idea and duly banished into the outer orbit of science).