Climate science is slowly catching up with the rest of us. At http://phys.org/print380256073.html … they have discovered the 536 and 541AD low growth tree ring events. Mike Baillie has recently conceded two volcanoes were to blame therefore having to give up on his well publicised idea that a cosmic event was responsible for one of them (or both). In the process, or on the face of it, he has abandoned the idea of cold weather induced by atmospheric airburst. However, we may note that it remains true that Comet Halley came by in 530 and many fingers pointed at it for an outbreak of environmental and seismic phenomena that followed in its wake. Indeed, the two volcanoes are all part and parcel of the general bedlam with major earthquakes and tidal waves rampant in the eastern Mediterranean zone (before and after the volcanoes) as outlined by Malalas and others.

It seems that only part of the story is being told. Why? The idea can only be to erase the ugly head of catastrophism. Cosmic disaster is an area mainstream just does not want to go – which means science is not really the art of capturing the truth. Concentrating on the two volcanoes is simply a relatively easy way to put catastrophism to bed – especially the kind of catastrophism outlined by Baillie in various articles and books. It will be interesting to see how he eventually responds to the avalanche of mainstream articles that have followed his concession. It is perhaps odd that people seriously think that two volcanoes alone are responsible for the fall of the Roman and Persian empires, quite apart from the collapse of China and India and disruption in the Americas and Europe. It should be obvious to a researcher there was a bit more than that involved – even if crop failure, drought and famine ensued (but only during the low growth years). We know from monastic records that monks had to cope with several years of cold weather, and this is one reason why they adopted leeks and cabbage as an important part of their diet. Once the better weather returned a more inclusive diet was re-introduced. Leeks and cabbages grow in the coldest of winters in western Europe.  However, climate scientists have a well earned reputation for ignoring the baby while throwing out the bath water (or is that the other way around). This article, we can be sure, is far from definitive. More ink will be spilled. 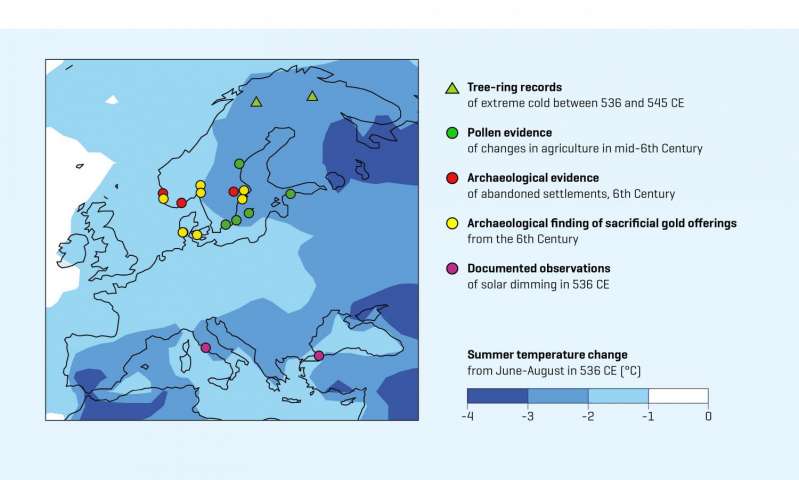 Meanwhile, at http://phys.org/print380270896.html … asks the question, 'are the recent Japanese and Ecuador earthquakes related?' (both occurred within one or two days of each other in April 2016 shortly after a big burst of energy from a CME that grazed our planet as it rushed through the solar system). This piece however fails to note this coincidence, or the giant sun spot gracing the outer layer of the Sun in the days before and after the earthquakes. The Sun had been very quiet for some time – and so had seismic activity on Earth.

The link explores whether there was a connection between the two earthquakes and we may note they occurred on different sides of the Pacific basin, in the so called 'ring of fire' – but otherwise it does not help a lot.