At www.haaretz.com/jewish/archaeology/1.752808 … a citadel located in NE Jordan that flourished in the 3rd millennium BC, contemporary the OK in Egypt, has been found – and the marks of an abrupt destruction event in around 2300BC (we are told). It is assumed that desert tribesmen were responsible but this falls into the general pattern of site destructions at the end of the Early Bronze Age. This would be an interesting site to test the theory of whether humans were agents of death and destruction or a natural disaster of some kind, at this point in time. Presumably, the details will be recorded diligently as the archaeologists would have sifted through the heap of debris in the top layers.

At www.ibtimes.co.in/secrets-of-6000-year-old-amulet-illuminated-by-science… … is about an early example of wax casting – in Baluchistan (a forerunner of the Indus civilisation) in around 6000 years ago.

At http://phys.org/print398344277.html … fish traps on the floor of the sea off southern Sweden have led to the discovery of a 9000 year old Mesolithic site on what had been a coastal lagoon – now submerged. Although it tells us a bit about lower sea levels in the early Holocene the site seems to be another one that  was overwhelmed around 8000 years ago – at the time the basin of the North Sea was submerged and the Solent valley became an arm of the sea.

At http://phys.org/print398422883.html … archaeologists find evidence of Neolithic dairy farming in the northern Mediterranean region which again is apparently dated around 9000 years ago. The authors point out that the terrain may have changed significantly in the interregnum. What is now a rather rugged coastline, in Turkey and Greece, where sheep and goats are the commonly farmed animals, the discovery suggests that when cattle were the preferred farm animal the landscape must have been open and well watered. Hence, once again we have possible evidence of a rise in global sea levels around 8000 years ago (but when such fields were inundated is an open question for the moment although the full article might provide some clues).

At http://pulitzercenter.org/reporting/lost-norse-why-did-greenland’s-vikin… …. where it appears the demise of the Vikings in Greenland is pushed later and later – to around 1400AD. It is now recognised Viking people exploited the marine environment once temperatures became cooler in the 12th and 13th centuries, causing Greenland glaciers to slowly advance down the river valleys and early frosts to reduce the amount of available summer pasture. It is also recognised the younger people may have returned to Norway and Iceland to begin a new life, leaving a rearguard that gradually died out. The facts are of course unknown. All that is left are the remains of farm buildings and fields. It seems that Jared Diamond (notorious for getting it wrong in Easter Island) also accused the Norse of over exploiting the land and spoiling their nest as well. It seems that when a scientist is driven by an obsessive and purely invented belief system his science is more than a little slanted and absent of common sense thinking. Of course the Norse exploited the marine environment – we didn't really need to find physical evidence of their diet (now established) as the Norse have a long  history in Europe of fishing. Cod is abundant in Norwegian waters and it is also abundant in Newfoundland waters. They also exploited the seal population. However, we still have the mystery of why they disappeared in around 1400 – did it have anything to do with the Black Death. It is assumed the plague is passed on through contact but various people have said it may have been an airborne disease – which opens up the possibility it may have spread to the Americas (including Greenland). As the population was so small in the Viking settlements we might never know – they may have thrown the plague bodies in the sea. 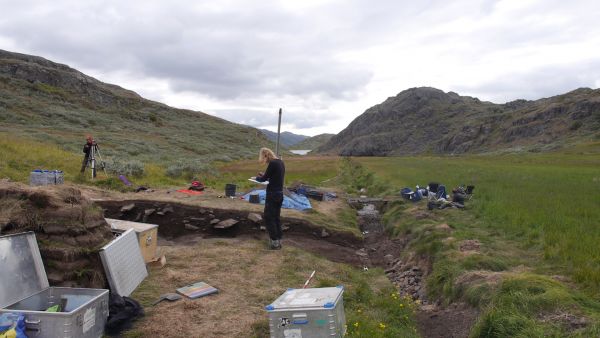