At https://wattsupwiththat.com/2017/02/24/rock-strata-dating-suggests-plane… … this story is all over the internet but I have chosen this link as the comments are worth scanning. It was published in the journal Nature (Feb 23rd 2017) and it appears to contradict the co2 meme in as far as it is not mentioned as a factor in palaeo-climate change. This is not surprising as it is dealing with great chunks of time – and cycles of thousands of years. Instead, the amount of insolation from the sun is the sole cause of Ice Ages we are told, as a result of small orbital changes. 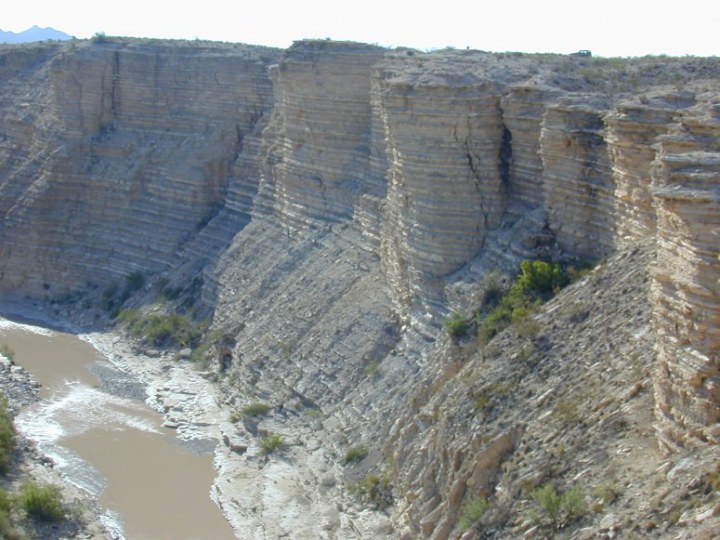 … These sedimentary layers (above) are said to be the result of orbital changes along the lines of Milankovitch. The premise is basic to their conclusion. The study does not attempt to look at the layering in any other way but via solar cycles. Catastrophism is absent – and the laying down of sediments rapidly is not aired (as some commentators note). It is taken for granted the layers were produced over a long period of time. As such, one can argue the study is faith based. Be that as it may, or not so may, the study also introduces another factor, the idea that nearby planets, such as Mars, affect the orbit of the earth. It is unclear why resonance with Mars is more important that electro-magnetic influence from Jupiter – but at least it marks an introduction on the idea of planets affecting other planets, and therefore climate on the long term.

A point of interest. The layered sediments in the image above were laid down over tens of millions of years, we are told, deposited at the bottom of a vast inland seaway known as the Cretaceous Western Interior Seaway, a shallow ocean that stretched from the Arctic to the Gulf of Mexico. The formation is said to exhibit pronounced rhythmic rock layering due to an abundance of clays and calcium carbonate. The sources of the clay are put down to the watery sea way itself, rivers running into the seaway, and weathering and precipitation on the land areas either side of the seaway. This is typical geological interpretation, married into the concept of uniformitarian gradualism. It may be right. It may also be wrong. The seaway appears to have emptied dramatically (leaving behind numerous marine fossils buried in the mud and shales. It may even have formed dramatically – or imagining beyond the limits of consensus thinking, it may mark a colossal tidal wave caused by pole shift. We may also note that pole shift adequately explains the existence of an interior seaway cutting across N America – and a subsequent movement of the equator (as suggested by Peter James the Australian geologist). Quite simply the study has ignored alternative scenarios – not only the period of time in which the layers were created but the manner of the coming and going of the seaway. There is one good point to the article. It doesn't mention co2 (and therefore doesn't wave a hand to CAGW).

Thye comments are very good. Recommended. One of the arguments made in the study is that the Milankovitch cycles are not enough on their own to explain the lapse times between Ice Ages (and therefore climate change), and another factor needs to be considered. The study authors have decided that a smallish input by the nearby planets may be relevant. In doing so one can consider the authors are concerned to prop up the mainstream consensus in respect of Milankovitch cycles, rather than fully taking onboard the idea of planetary influences (as well as solar influences on the orbit of the earth). There is quite a large literature on planetary effects on climate (particularly at https://tallbloke.wordpress.com) but the idea that planetary orbits may not be as stable as alleged brings up the prospect of worlds in collision (funny that idea keeps popping up lately but it does in the comments as people take the idea of resonance stages to the extreme). One commentor provides a nice link to an online article on the stability of the solar system – see www.ias.edu/ideas/2011/tremaine-solar-system