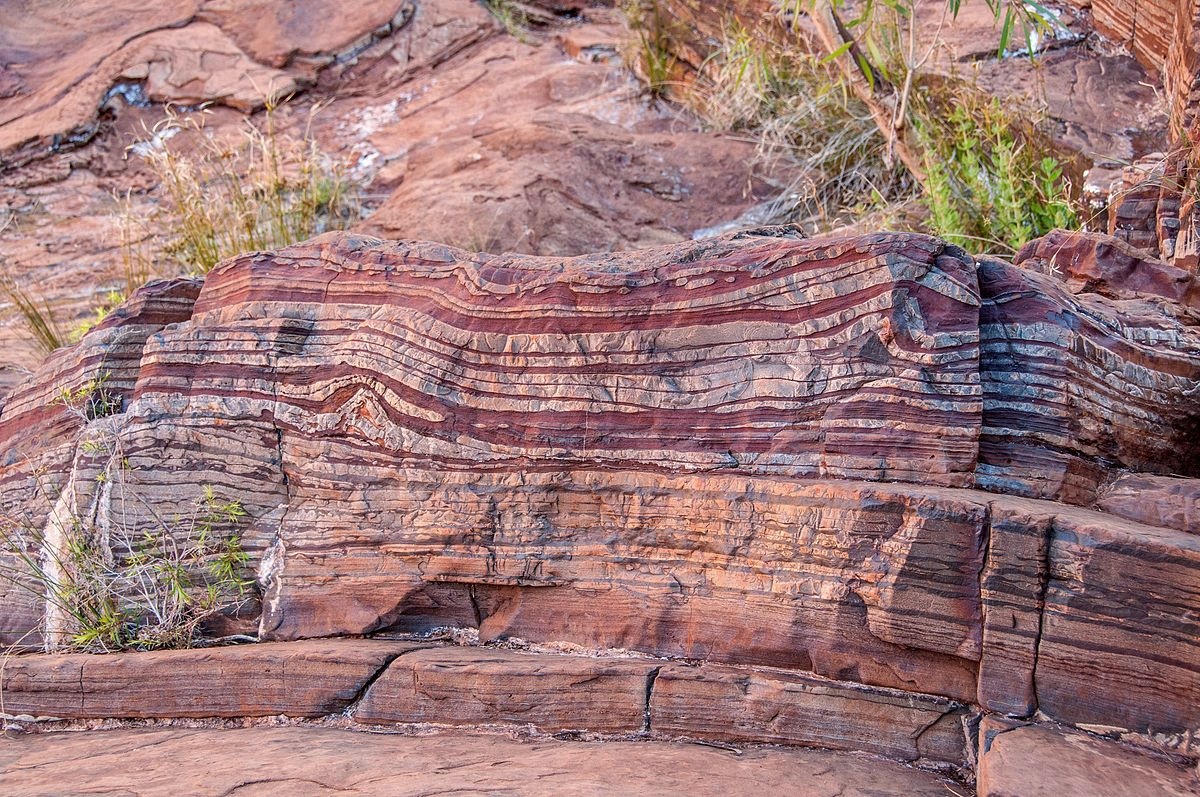 …. layers of iron oxides separated by layers of chert (silica rich sedimentary rock). It looks just the kind of thing formed by turbity in a body of water. In uniformitarian geology the layers are assumed to have been laid down over a long period of time, in an ocean environment (to explain the connection  with water). They are thought to involve water with a high oxygen content – as in tides or running water. See the explanation at http://museum.wa.gov.au/research/collections/earth-and-planetary-science… … and this theory, Gary maintains, is controversial as ferrous iron is not soluble in sea water. There is however a lot of iron in certain areas of sea water as this is demonstrated by various articles on how that iron may have got into the oceans (in the past). Iron oxides can also be found in springs, and streams. It gave birth to bog iron, for example. Springs sometimes have a red colouration which demonstrates the presence of iron oxides.

Gary links to https://phys.org/print344595164.html … for more on iron in sea water. Hydrothermal vents have been proposed, a sort of giant underwater spring of water and other chemicals, and in particular, black smokers (which are attracting geologists keen on mining the depths). The black smoker proposal seems to have come about as the presence of banded iron deposits seems to require an under the ocean location and a theory that fits the gradualist model. In other words, black smokers in this instance may be a red herring … as Gary goes on to point out. However, his scenario involves a celestial deluge of water and various other materials such as iron oxides and sand (the  latter in order to explain the presence of silica). One might also theorise, if black smokers are involved, that silica and water came out of the innards of the Earth – and both are known to be major constituents of the upper Mantle and lower crust. In Gary's view there was a rain of iron and silica that had been deposited in the atmosphere during a catastrophic event (or events).

Gary also mentions Guy Berthault, a controversial geologist, and an experiment he did which can be seen at www.YouTube.com/watch?v=wFST2C32hMQ .. and produced microstrata very similar to the banded iron layering – all down to particle sorting in a turbulent flow (rushing water as in a tsunami). Berthault's experiments were also said to demonstrate rapid deposition – strata formed within minutes rather than years, or hundreds of years/