This is the title of an interesting post by climate scientists Tim Ball at https://wattsupwiththat.com/2018/11/04/most-people-live-in-a-flat-earth-… … most people live in a flat earth and struggle to visualise climate and a three dimensional atmosphere. John Dee, science advisor to Elizabeth I, gave Francis Drake sailing and scientific instructions on his voyage to find a northern passage. One of those instructions was to accurately determine the longitude of the west coast of North America. This research resulted in the findings being passed on to Dutch map maker Abraham Ortelius. He produced a world map with the coast moved 60 degrees longitude to its proper position. Dee also drew a map, for the queen, that illustrates his spatial awareness of the world. It is a unique perspective as it is looking down on the North Pole. Our view of the world has been distorted by the Mercator map introduced in 1569. Its specific purpose was to aid navigation through a three dimensional world using a two dimensional map to make it easier to plot on paper – and for its users to understand.

The distortion of the Mercator maps increase as you move away from the equator until north and south poles, single points on the earth, become as long as the equator. The Mercator map became the standard projection in the classroom – and most atlases. He claims this set back our understanding of the spatial form and relationships on the earth and in our solar system. It seriously hampered the understanding of geographic relationships – climate and climate change. However, in some ways the ancient Greeks had a more correct view of the earth as they understood the third dimension. It is manifest in the construction of the Parthenon as they built the centre of the base higher than the ends to offset distortion caused by the eye. They made it appear to look level – when it was not. This awareness of space and the third dimension allowed the Greeks to calculate the earth's circumference accurately. Eratosthenes did it by measuring the difference in the length of the shadow of a stick at noon at two locations. The idea of a differing angle of the sun is critical to understanding the climate and climate change. It is why the Greeks identified three climate zones – the Torrid, the Temperate, and the Frigid. It was all to do with the inclination of the earth in relation to the sun. 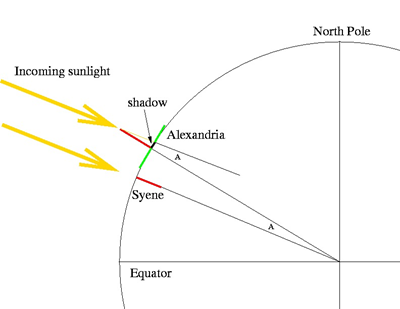 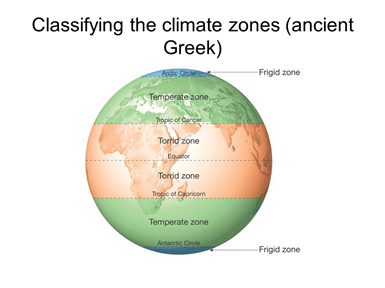 … The understanding of three dimensions disappeared at the fall of the Roman empire and teh Ptolemaic view of a geocentric universe became the norm. In this view the planets and the sun orbited around the earth. This view held sway until Coperncus, 1473-1543. He proposed a heliocentric sun centred system but it didn't receive public enclosure until his death. However, physical evidence to prove the theory didn't appear until 1725 with the discovery of parallax. Few know or understand it he says but that is of no consequence to most people.

At this point Tim Ball says something unnecessary as he says 1 in 4 Americans believe the sun orbits the earth – according to a survey. Taking notice of any survey in which the question might be mangled is not good practise. In addition, the question itself comes with a certain amount of ambiguity. These surveys are not scientific and up to that point his post was interesting – and is less so afterwards. In spite of that the post continues with some further interesting historical facts – and opinions from historical writers. The post leads up to the tilt of the earth as it rotates around the Sun – and the Milankovitch effect. Excellent overall piece of thinking – and an education for most of us.

At http://notrickszone.com/2018/11/04/the-rotors-of-sickness-wind-energy-pr… … a report on infrasound (low frequency noise) by German TV station ZDF has revealed how wind turbines cause widespread health issues. Experts say such illnesses are all in the heads of people – which of course is right. The noise puts it there. The German Ministry of the Environment currently refuses to accept the report – which would be disastrous for the government as well as wind turbine operators. At some point litigation will begin – and if the first one is successful it may turn into a torrent of court orders (and fines). However, people have been researching health effects from wind turbines and at http://notrickszone.com/2018/11/07/occupational-health-expert-exposes-th… … including occupational health people. The link takes you to a video of a talk by one such on the effects noted by the researcher over a long period, some 30 years.