Megalodons might be something you know about because your children or grandchildren have been on You Tube looking for monster animals – and Megalodon were giants of the shark world. At https://phys.org/print463749152.html … at 2.6 million years ago there was a huge spike in iron-60 radiation, we are told. A new paper in the journal Astrobiology (December 2018) by a Brazilian team of scientists is proposing an interesting idea. Iron-60, they say, is radioactive and it is relatively new radioactivity because if it went back deep into the past of the Earth it would have disappeared over time (or become very faint). It is generally thought it derives from supernova events that left a trace of themselves in earth rocks. The proposal is that a major supernova (or possibly a group of supernovae) occurred at the end of the Pliocene (boundary with the Pleistocene) and in the process it killed off large sea mammals such as the Megalodon, a super sized Great White shark. In other words, we have a catastrophic event at the end of the Pliocene. This is interesting as at one time the Pleistocene did not exist and was added to the geological record in order to compartmentalise the ice ages. 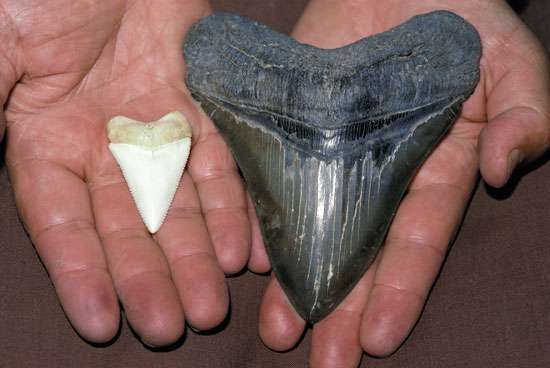 .. the white tooth comes from a Great White and the black tooth from a Megalodon. Big difference.