Loks like a case of a dog with a bone. At https://phys.org/print468584732.html … mainstream don't seem to want to abandon their cherished views on North America crashing into South America – but some geologists are being stubborn. This is another story about the isthmus of Panama. How did it come into being. In a study in Scientific Reports we are told that not only were tectonic process involved but volcanoes also played a significant role. Mainstream opinion is that it formed 2.8 million years ago as the Caribbean plate bumped into the South American plate. However, did underwater volcanoes have a role in pushing up the isthmus from the sea floor, raising some areas above the ocean waves. New geochemcal and geochronological data from the Panama Canal upgrade have found volcanoes much older than 2.8 million years ago. It seems there was a lot of volcanic activity going on 25 million years ago. The canal was constructed in a shallow area of the isthmus which is thought to have remained under water for most of its geological history. Now, it is being suggested the growth of volcanoes play an important role in the rise of the isthmus – rather than solely a collision of plates. Scientists are keen to categorise when all this took place as it impinges on climate. Once the isthmus had formed, blocking water from flowing between the Atlantic and Pacific oceans, it forced Caribbean water to form what is now known as the Gulf Stream (and warm weather in NW Europe). The assumption in all of this is that the geoid of the earth is relatively stable – and no readjustments of ocean water have occurred.

Volcanoes appear to be popular this week as at https://phys.org/print468594627.html … we have a study in Nature Communications (January 28th 2019) which is an attempt to catalogue volcanic events that blow particles high into the upper stratosphere. Not all volcanoes are responsible for opaque skies it would seem – and sulphur content is one of the reasons. In this admirable endeavour it is hoped to more easily identify historical blips in climate, aiding not only the global warming lobby and your average geologist, but also those of a catastrophic bent. The study found that previous research on ice cores missed some atmospheric events and falsely identified others. They have produced a graph of volcanic blow outs that caused the climate to cool (see image below). It seems that some events, formerly thought to be big stratospheric eruptions, did not have the tell tale isotopic signature. They conlcuded these layers (in the ice cores) must have been deposited by clusters of small volcanoes, a not unreasonable deduction. We might ask – is it possible other events may have been involved (currently unrecognised as creating opaque skies, leaving lots of dust in the upper atmosphere). One might think of meteors – especially those that might break up as they enter the atmosphere from space. At the same time they also found big events that were confined solely to the southern hemisphere. 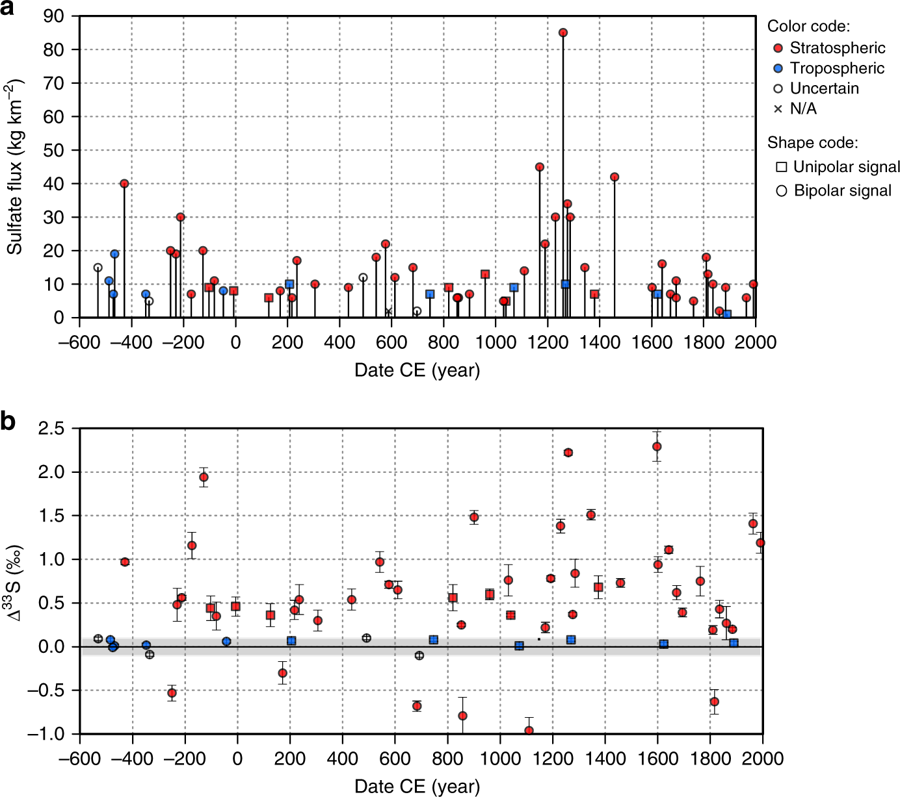